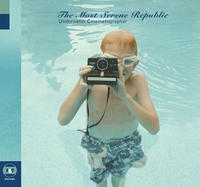 The Most Serene Republic
Underwater Cinematographer
[Arts & Crafts - 2005]
*Sixeyes Score: 5.5 out of 10

Opening with a prologue and closing with a ... a guess what?... an epilogue; the most recent Canadian addition to the Arts & Crafts roster, The Most Serene Republic, make their label bow with, Underwater Cinematographer. Sounding at times like Death Cab for Cutie on acid (acid supplied by The Flaming Lips, of course) crossed with Arts & Crafts label bosses, Broken Social Scene, and the type of smart-alecky kids who invade coffee shops to talk about jazz, Frank Zappa, Gustav Klimt, Van der Graf Generator, and mad russian composers; The Most Serene Republic are kids who have discovered bohemian culture. They also sound like you'd imagine a high school clique of vegans who worked part-time at either Value Village, or a little independent Health Food store, would sound if they took over the high school band room. The vegans caught somewhere between neo-hippies and faux hipsters, with a couple of rebels tossed into the group: the part-time pot dealer and the fast food employee. Oh, yes, don't forget there has got to be at least one who's the off spring of a liberal college art prof.

Yeah, I know all this sounds smartass, but I don't like this band, or their debut release, Underwater Cinematographer. There is talent here, most notably in drummer, Adam Nimmo, but if you're looking for a band that has discovered itself and put all it's energy into who they are, you're barking up the wrong tree, TMSR has lots of energy, but have yet to discover their path, how to channel that energy. And since this is the case you could find something you like on this scattered genre recording, if you're lucky.
at 8:38 AM