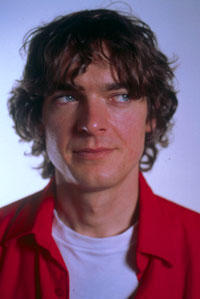 If you were entranced by the solo pop gems which A.C. (Carl) Newman gave us on his CD, The Slow Wonder, then fellow Canadian Mike O'Neill may just be a perfect fit. A hands-on-type, as are many in Canada's indie music scene, O'Neill spent two years putting the songs found on his second solo work, The Owl, on tape. And what he has produced is sweet power pop bliss that never veers into syrupy, maudlin, or boring territory. Now a veteran songwriter and performer, O'Neill pens tightly constructed songs which are lightened by the arrangements and his vocals. At times his voice takes on an extremely pleasing George Harrison sheen and, well, he simply has a great voice and sense of harmony for pop music. One which he uses to display his fondness for '60's pop music giants: The Beach Boys, The Beatles, The Zombies, Paul MacCartney, and slightly more current singer/songwriter, Randy Newman.

The fifth track off of The Owl [a great album which I highly recommend], "Mr. Carvery", chimes, shuffles, and clucks it's way into your head. All of O'Neill's songs hold pleasant surprises, unexpected sounds rise up and around the multi-tracked vocals, unexpected turns of 'sound' pop up so smoothly they grab your interest and they just may make you smile.

"Mr.Carvery" is a prime example...

This mp3 download was sanctioned by net label, Zunior, and the link will be deleted the weekend of October 15th... so get it while you can.
+ mr carvery [Rapidshare file mp3]

----
Mike O'Neill's The Owl was the first release on the Canadian net label, Zunior.com and can still be purchased there as an album or single tracks. Founded and run by O'Neill's former partner in music, Dave Ullrich, together they were Canadian indie music stars, if there is such a thing, as The Inbreds. And as anyone who listened to Canadian college radio in the nineties knows, the Inbreds song that got the most play was "Any Sense Of Time" [mp3].
----

Go here to stream short clips of The Owl.
*You will also find Mike O'Neill's debut solo work, What Happens Now?, at Zunior.
at 6:51 AM