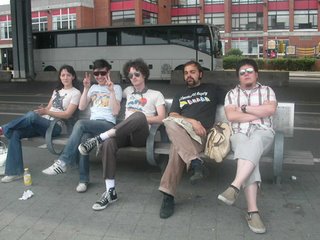 The Bicycles roll along the musical streets of Toronto aiming straight for your indie pop heart. They are also, without question, steering for your sweet tooth (teeth?) as well. This great quintet have been rolled in sugar scraped from early '70's vinyl (Drew Smith, second from right, is wearing, what I believe is, a Partridge Family t-shirt in the photo).

The band caught a 'sweet' break when fans of UK's, The Boy Least Likely To, suggested The Bicycles as openers for their North American tour. TBLLT liked what they heard and they hooked up with The Bikes via myspace. 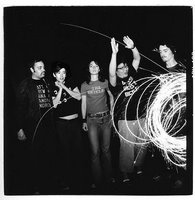 The only fault I can find is that these mp3s (offered below) are too damn short, but the album is bursting with 17 songs! So, what the hell? 17 short (and great) songs are as good as ten lenghty ones, maybe even better! It sounds like a lot of separate tracks have been layered in these two mp3s. And in these they sound like a quasi-acoustic, horn flavoured, tambourined wrapped, hand clapped, candy bar. NO, that's not quite right... The Bicycles are more organically sweet... they're a crisp, tart apple blanketed in caramel... with a handy popsicle stick handle.

The band's full length debut, The Good, The Bad and The Cuddly (fuzzy logic recordings - May 2006) was ably assisted by José Contreras (By Divine Right), who mixed the album, and engineers Dan Bryk and Robert Sledge (Ben Folds Five).

+ gotta get out
+ paris be mine