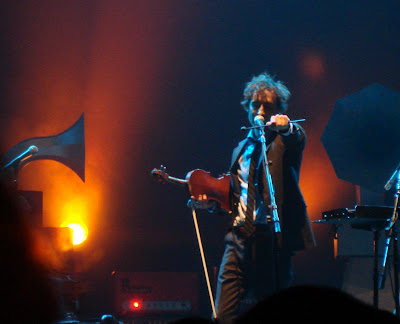 What a Friday in NYC.

An impromptu exchange with a limo driver named Bobby resulted in my arrival at Beacon theatre in a white mini-stretch. An affordable and credit card accepting liquor concession graced the lobby. A 'Jack on the rocks' brought me to row G. A phenomenal performance ensued, highlighting a complete evening.

Andrew Bird is firmly cementing himself as one of the most talented musicians in indie rock. In the midst of an international tour, alternating between theaters and festivals, his Beacon Theater performance was classical and enjoyed. Playing tracks off various albums, the set list was buoyed by; "Heretics", "Fake Palindromes", "Opposite Day", "Plasticities", and "Dark Matter", among others . He played and plucked the violin with extreme proficiency, switching between guitar, xylophone, and whistling mid-song.

The elegance of his sound bends genres. Seeing him live can chill you out and inspire. Andrew's 2007 release is titled Armchair Apocrypha and is available on Fat Possum Records.

Check out his upcoming tour dates here.
at 5:01 AM