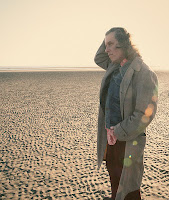 June 18th marked the release date for Mark Mulachy's first studio album in eight years, Dear Mark J Mulcahy, We Love You. Recorded in Northampton, Massachusetts, with Henning Ohlenbusch at the helm, the album was mixed by Paul Q. Kolderie and mastered by frequent Mulcahy collaborator Myles Mangino.  Long adored by fellow musicians and industry insiders, Mulcahy has tended a feverish core audience since his bow into the musical community in 1983 with Miracle Legion. Now, three decades on, the odds of the fever spreading are still in his favour with the arrival of a healthy new strain of Mulcahy music.

One of several standouts on the latest arrival is "She Makes The World Turn Backwards". A video which makes great use of Mulcahy's abilities as a live performer in that the song is performed live for the cameras.

Mr Mulcahy was more than kind to answer a few questions for Sixeyes. Also, Sixeyes must thank Mark Mulachy's manager, Ross Murray, for his assistance.

S: How comfortable are you putting your music in the hands of another, so to speak, when making a video? Do you ever feel a loss of control?

MM: It's always  a gamble... good ideas on paper don't always translate to good ideas on film. A song is three to four minutes long, but only has to occupy your ears. A video has to keep you more interested and sometime three minutes is a long time. I've had some good fortune with a lot of directors, but sometimes it just doesn't work. It's no one's fault...  I think a budget helps, but money won't make honey.

S: Did performing the song live put you more at ease? Was this director Kyle Kochan's idea?

MM: I was for lip synching it, but we would've lost to the greatness of the chorus. They hated the idea. I'm also a pretty bad syncher. Live was the best and only way to do it. The band played it so well and the chorus added the unique perspective that singers of their stature bring to a song. It was a great day for me. Kyle thought of all the great ways to illustrate what was  happening in the room. He had it all blocked out, so the  story unfolded. That's the genius of Benton West.

S: Is the premise of a live video meant to address the fact you hadn't performed live in years?

MM: No, I don't think so. I'd like people to come see me live to see me live. Maybe we should make a performance video.

S: What to you feels most different about this album in comparision to those in the past?

MM: Just as a feeling, I'd say I accomplished a goal. I set out to make this record a certain way and thanks to henning and the rest, it we did pretty much what we planned. As for comparison, I don't know how to answer that. Even though I've played the nostalgia game, I'm lousy at looking backwards.


Thanks very much to the busy, Mark Mulcahy.


Below you'll find a streaming mp3 of Mulcahy's "She Makes The World Turn Backwards", along with the aforementioned video of the same song. As a bonus, we've also got a streaming selection of Mr Mulcahy's great past work!