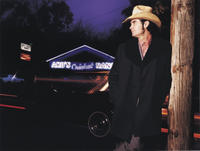 Singer/songwriter Jim White has stuck to his guns and continues to create music that thrives on the everyday oddness he encounters in the Southern US. He then, as all artists do, strains the bits and pieces through his own eyes, eyes coloured by his fondness for the gothic. His music has elements of country and folk, but it's been dragged out into the steamy Alabama sun from beneath a kudzu choked trailer home in a trailer park called something like, "Jesus _ave_". (You know, someone took the two 'S' letters, they must've needed 'em mighty bad).

After trying his hand at pro surfing, modeling, and who knows what else, he settled on giving music a shot - and this was after maiming his left hand in a band saw. He recorded some demos, they found their way to the offices of label Luaka Bop, and was soon in studio recording his debut, "Wrong-Eyed Jesus (Mysterious Tale of How I Shouted)".

This was followed by No Such Place, featuring this track, "10 Miles To Go On A Nine Mile Road".

His current release is also on Luaka Bop and is entitled, Drill a Hole in That Substrate and Tell Me What You See.
+ static on the radio
at 5:42 AM