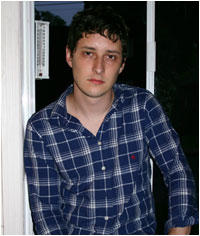 Montreal band, The Social Register, are led by JF Robitaille straight into his love of British pop. I'm not talking about Brit pop, his love is for British pop music that was crooned to listeners in the late 70's and early 80's. Especially so on the sweetly melodic tune, "Bury Every Dream". Musically melodic, as well as lyrically, this song may bore holes in hearts of stone and wring tears from eyes of steel.

I asked JF a few questions this past April and this is what he had to say about his influences and how Jordan Zadorozny (Blinker the Star) came to mix his songs...

I was inpired by the music scene in London. I always have been. I love a lot of British song-writers as well (Billy Bragg, Morrissey etc...). Jordan Zadorozny heard a couple of rough mixes we had done and loved the songs, he asked if he could do some mixes and I said of course. I think he's an extremely talented guy.

It turns out that Robitaille has been signed to Rhythmbank Entertainment. This is what I found on Rhythmbank's homepage (although it being undated, I'm not sure if this is recent news):

Montreal singer-songwriter, JF Robitaille, is currently recording his debut album, recorded by Howard Billerman (The Arcade Fire) and Brian Paulson (Beck,Wilco) at Hotel2Tango studios in Montreal. J.F. has long been acknowledged as an extremely gifted song-writer in his native Canada and has had the privilege of opening for such acts as Sean Lennon, Keane, Tegan and Sara, Jonathan Richman, Hayden, Ben Lee, Mellissa Auf Der Maur and many others.