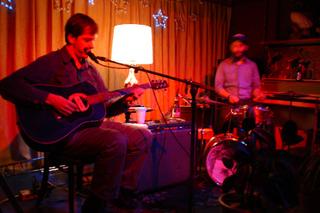 Ham1 is the name that Athens, Georgia teacher, Jim Willingham, uses when he's handing out rock 'n roll homework. I wish I got homework like this, maybe I would have done it once in a while. Willingham's music is one of those unexpected surprises, like finding a twenty in the pocket of the jacket you hung away in the closet last June, kinda like that. The music played by Ham1, who are Willingham (guitars, vocals, miscellaneous), along with Olivia Tremor Control drummer, Eric Harris (drums, organ, backing vocals), and Chris Sugiuchi (trombone, percussion, backing vocals), was inspired by film soundtracks Willingham heard on radio for seniors while living in Florida. This inspiration first saw life in an earlier Willingham band called Prince Rondevals. After returning to Athens, the music's soundtrack inspiration began to take on vocals and the influences and impressions of today's indie music. Ham1's musical collective includes members of Olivia Tremor Control, Frosted Ambassador, the Glands, Japancakes, Hayride, and the Rock*A*Teens, among others.

Ham1 will release its self-titled debut full length on November 15. Entirely self-funded and self-released, the album offers tracks like "Alice's Call" and "Broken Crown". "Alice's Call" is all windswept western vistas with 60's keyboards blowing in now and again, like Peter Fonda roaring across the desert in Easy Rider; it builds atmosphere and then inhales it like a drag on a cigarette and then, guess what? It exhales. The song "Broken Crown" shuffles and croaks, a down and out All-American story, that wheezes in just the right way. Many of the instrumentals and instrumental interludes of Ham1 are like this. As well, the production of the songs is an important element, giving many songs the feel of a 60's Mariachi version of The Violent Femmes. Which is as good as it sounds.