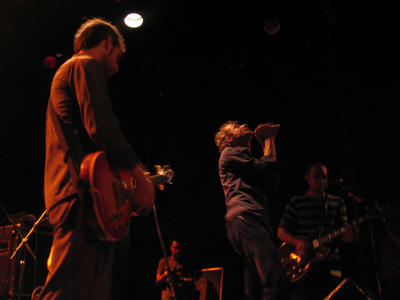 Last night I was overwhelmed by the show put on by The National at Toronto's Horseshoe Tavern. They seemed to be a modest unassuming bunch who just happened to turn every second song they played last night into a sonic storm of dual guitar lines, shrieking violin, and Matt Berninger's impassioned vocals (but don't forget the solid seamless rhythm section of brothers, Scott and Brian Devendorf). He was literally reaching for something, head back... his long, rail thin body constantly strained toward something up above, up on tiptoe most of the night. The most blistering highlights were "Abel", off of Alligator, and "Murder Me Rachael", from Sad Songs for Dirty Lovers. When they finally reached shows end, three or four encores later, the Brooklyn band thanked the Toronto crowd and humbly departed the stage from their first performance in the city.

Download The National's album Alligator at eMusic, if you aren't a member you can still get the album by signing up for their 50 Free Downloads trial here.