Minus Story Interview / Move The Music Minus Story are a band of friends; they were a band of boys from Boonville, Missouri, a small city of around 8,500, but they have grown into men as tends to happen with boys. Now living in Lawrence, Kansas, these men create and play music, they write and perform indie rock with a peculiar, personal stamp. And as often happens with music that is so original and personal it can be tagged 'experimental'-- I think a much more fitting tag would be artistic.

Artist/musician and singer, Jordan Geiger of Minus Story, spoke to Alan Williamson of *sixeyes. He ruminated on the band's new recording, No Rest For Ghosts (Jagjaguwar - October 11th), homeless men peeing, and who he's been listening to lately (uhh... not the homeless men).


*Sixeyes: Why is your latest album for Jagjaguwar entitled, No Rest For Ghosts? And why the recent ghost theme with the new disc's title and also the Heaven and Hell EP containing the track, "Ghost Story"?

Jordan: Well, for awhile we were calling the album Here Comes Little Death, which was a reference to the pink skull on the cover. Although this album seems sort of dark sounding, much of the lyrics were written with a sort of cartoon/storybook in mind, as with The Captain Is Dead, Let The Drum Corpse Dance.

No Rest For Ghosts comes from the lyrics in one of the songs, and it seemed to tie the songs together nicely, in my mind at least. To complicate the matter, Andy (Byers)just wrote an awesome song called "Here Comes Little Death" which will show up in the future.

Nick's (Nick Christus) "Ghost Story" (a spoken word track) was put on the EP pretty much because it was an amazing story he told us with a completely straight face at breakfast one day. It's totally true, and there's a couple weird things omitted on the CD version. Since the EP already contained a mish-mash of songs, we figured it was the perfect time to put a ghost story on one of our CDs. As for the theme, a lot of the album is about a people that are out of control of their destiny, and ghosts seem to be evocative of certain things like that for me.

*Six: How much influence does your location, Lawrence, Kansas, have on your music?

Jordan: It's cheap here and there's a great music scene. It's a small college town with a good amount of culture, but there's farmland and farmers a couple miles out of town. There's a ton of great bands from around here: Ghosty (best album of the year!), Ad Astra Per Aspera, Black Christmas, Appleseed Cast, thesistermaria, namelessnumberheadman, etc...

That said, most of us in the band have known each other for 20 years or so. Our common experiences and musical tastes are probably the #1 influence.

Our hometown of Boonville, MO, probably influences us a lot.

*Six: When you and the band set out to make a new record, do you lay down certain lines or parameters you want to stay within, or break?

Jordan: The Captain... was consciously affected towards a lo-fi 60's pop influence in my mind. We sort of wanted to avoid that, because the new songs wanted a more subtle treatment. Other than that, we really didn't have any rules, except to do the songs in the way that's most interesting to us at the time. We also decided to track a couple of songs live, which was awesome. The next record will be recorded at least partly in a real studio, which will be different for us.

Jordan: I'm not sure about the worst band name, but The Zombies is the best band name ever. Audioslave is pretty bad.

*Six: How did the west coast tour go?

Jordan: Awesome. Then, we had three days of sickness, car trouble, a cancelled show, and an entire state of booked hotel rooms. Other than that....

My non-show highlights were eating good food, seeing old friends, going to the Seattle Aquarium, and visiting the library. 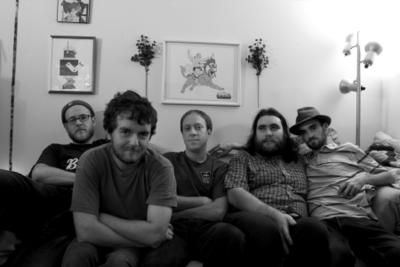 *Six: What's the strangest thing that has happened to you while on the road?

Jordan: At CMJ last year, this girl came up to Mark (Sanders) and swore that she had seen him in a play recently, performing the part of a homeless man who apparently could pee for like 5 minutes. Nick and Brian (Phillips) confirmed her suspicions as Mark laughed silently. It's a funny story when told by one of those three. Apparently, it's a well-known play. Shows how much we know!

Also, driving through some mountains in Pennsylvania at about 4 in the morning, while everyone else was asleep, Andy and I came around this corner and saw a deer sitting on the side of the road in the headlights of a state trooper's car. It had a huge bloody hole in it's stomach with innards coming out. It was licking at the wounds. It was really fucked up but beautiful in a weird way. We got really freaked out listening to Jeff Buckley and Bjork after that, so I think we ended up putting on JT to lighten the mood as we drove down into a town.

*Six: What's been playing lately in your iPod or CD player?

MINUS STORY MP3s...
from No Rest For Ghosts
+ Little Wet Head
+ Knocking On Your Head

from Heaven and Hell EP
+ Time Wastes Itself

from The Captain is Dead, Let The Drum Corpse Dance
+ You Were On My Side
+ Joyless, Joyless

Minus Story will hit the road October 18th and follow it around the US (with one stop in Canada / they will play Toronto on Nov. 7th) until November 11. This tour will mark the first time the organization, Move The Music, will assist an indie band on the road.

This is from Move The Music's webpage:

"Move The Music has been created with the awareness that touring can prove very costly for most independent artists who are generally unable to acquire performance guarantees and most often play for little or no money. As a result of the high costs, especially in light of current fuel prices across the country, many artists rely on credit cards to cover expenses, while others are simply unable to tour due to lack of funds. Without touring, the music of many deserving artists remains unknown outside of their local area.

Move The Music is a nonprofit 501(c) (3) charitable organization dedicated to supporting these artists by providing financial assistance to allow forward thinking musicians the opportunity to take their music on the road."

Learn all you need to know by visiting movethemusic.org.