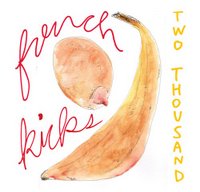 The French Kicks new album, Two Thousand, is full of atmosphere, nods to the past, and delightful moments, but as my old art teacher used to say, "when you look at the whole thing, it doesn't check out". I'm a big fan of the last French Kicks album, Trial of the Century; the title song made it onto a large portion of the mixes I've made over the past couple years. So when I got this new album, I was hoping for something like the last album, only better, the way that Trial of the Century was like the previous album, One Time Bells, only better.

The album opener, "So Far We Are", is full of vocal harmonies, chiming guitars, a syncopated drumbeat that references the Cure, and an almost great chorus that doesn't have enough to it to make it support the song. At the end of the song though, the two chords that hold the song together grow wearisome and one wishes that the song were about a minute shorter.

The next song, "Also Ran", is stronger and plays to the French Kicks' strengths: Nick Stumpf's falsetto mixed with counter melodies on the chorus, a driving drums and synth, and a bass line like a sped-up "You Can't Hurry Love".

"Cloche" features driving acoustic guitar, floor toms and a killer lead guitar line, but suffers from a weak vocal melody. Next up is "Knee High". Both these songs are fine, but kind of retread past territory from the French Kicks. They've set the bar high enough for themselves as sweet pop songwriters that the obtuse guitar line of "Knee High" doesn't sound like a bold or sassy new direction, just different for the sake of being different.

"Keep it Amazed" features a drum part that I swear was already used on the last album and makes me think that the band is just sleepwalking through their songwriting sessions. The song is just typical French Kicks: roomy shuffling drums, jangly guitar, and some piano tinkling here and there. The drums are too bombastic and the mix is bad and for all its good parts, like the vocal harmonies, the song is just hard to enjoy, especially after the 3-minute mark. A song like this has no excuse for being over 5 minutes long.

"No Mean Time" is a mid-tempo acoustic rocker that changes key for the chorus and it works.The problem with this one, for me, is the weird lead keyboard line. It gets kind of irritating after the first 5 seconds and distracts the listener from the vocals that it overshadows.

"Basement: D.C." features a bass line stolen directly from U2's "The Three Sunrises", and once again we are reminded that less isn't always more; a vocal melody this simplistic combined with only one chord for much of the verse cannot and should not be allowed to last so long. This typifies the weaknesses of this album - there are some good sounding instruments here, and some good ideas, but it suffers from lazy songwriting.

By the eighth track, "England Just Will Not Let You Recover", one would swear we've already heard this song, if not on this album, then on one of the older French Kicks albums, and I'm not even sure why I should keep listening. The vocals, although beautifully harmonized, are just wordless oohs and aaahs, and like most of this album, they are meaningless. It sounds good but has little content.

"Hey I Wait I" starts with the French Kicks back in the Walkmen sound-alike mode that was found in their earlier works, but about a minute in, the guitars and off-kilter drums ramp up and it becomes a thankfully short and good 3 minute song.

The album closer, "Go On" is a quiet, moody, brooding number that kicks into gear about 3/4 of the way through the song and makes a good effort at redeeming the second half of the album.

The album has some quite good moments, but is held back by all the "oohs" and "aahs" and the sound-alikes from their past albums. It would work better if the band cut 4 or 5 of the songs and made it an EP. In the end, it's a fine effort but doesn't quite try to push far enough ahead into new musical territory to make it a good album, just a collection of some good songs and some not so good ones.


JP Swenson is a musician and English major who loves to misspell and misuse words. He is fascinated by regional accents and is somewhat ashamed that as a native Pacific Northwesterner, he has no accent.
at 6:25 AM