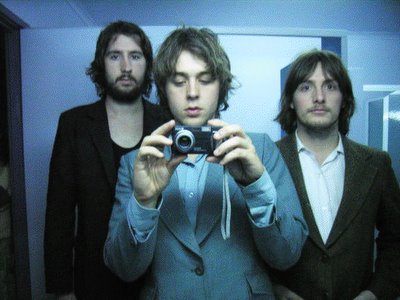 The Vasco Era is compromised of brothers Ted (bassist) and Sid O'Neil (singer, guitarist) and a friend, Michael Fitzgerald/Fitzy (drummer) and got listeners attention by winning the 2004 National Band Comp, a competition that has seen the entrance of nearly every great Australian band over the years. They're known for hot live shows (including copious amounts of sweat from the familial connection– I say this as someone who saw them from the front row 7 times in just over two months) and are particularly well known on the festival circuit. Now, I still have no idea what blues/rock fusion actually means, but that's the category I'm supposed to believe the band falls into according to their official bio.

The best I can come up with is that every song feels like it's bleeding. Emotional and overtly raw, Sid O'Neil has a voice that is never going to sing anyone to sleep and he consistently sounds as though he's going to need throat surgery by the age of 25. That pain is strangely hypnotizing though, backed up by a rhythm section that has seen the most drunken men get up and try and dance. While the band's constant touring has perfected their live show, their 2005 EP Miles offered a slightly more sedate appearance of the most popular songs from their set. For me, I'm not sure they can match up with the experience of being sweated and having beer spilt all over me (they really are a dirty sounding band, I can't stress this enough) but it is interesting to hear a less manic take on the material.

Currently, The Vasco Era are playing some gigs in the UK (including one supporting Australia's latest great export according to the world – Wolfmother) and then returning to gear up for the release of their first LP, due out some time this year.

From the Miles EP
+ kingswood
+ don't go to sleep

Demos from the new album are also available via their myspace.

According to googlism.com 'Jenn is awesome dot com',' a very cool kid' and also 'the #1 nyc antifolk musician 2002'. Apparently, Jenn Rogers has been making a lot of international flights from her home town of Sydney, Australia and has been far busier than she ever realised.
at 4:22 PM