The Seedy Seeds snagged me when I first heard "The Little Patton". It's childlike simplicity brings a smile to the face (where else would it bring a smile?) and it's sing-song melody will squeeze a song from the lips of most every listener. Mike Ingram and Margaret Weiner are The Seedy Seeds and they supposedly began a band to force themselves to learn to play the instruments they owned. Well, whatever works, they've got some fun stuff here on the record, Change States, and Margaret Weiner's got the kind of voice that I will continue to try and discover what's so appealing (okay, Mike sings too, and acquits himself quite well, so there). 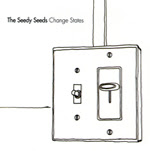