Toronto's Hayden Desser will release his latest record, In Field & Town (Hardwood Records), on January 15th. His myspace page has the eighth track "Where and When" streaming... and it's vintage Hayden--a great vocal hook in the chorus, a fascinating syncopated beat, and a trumpet that sounds fantastic in contrast to Hayden's smoky voice.

You can pre-order the album on iTunes (pre-order during the week of January 8th and get exclusive bonus track "Disappear"), also, you can see Hayden live across Canada beginning January 16th in Hamilton, see the dates below. Accompanying him on several tour stops will be fellow Hardwood Records artist, Basia Bulat. I've told you about her in the past a few times, for example here, and this is only more reason to get up off your butt and out to a show. 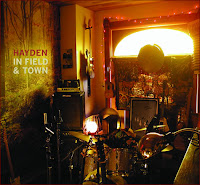