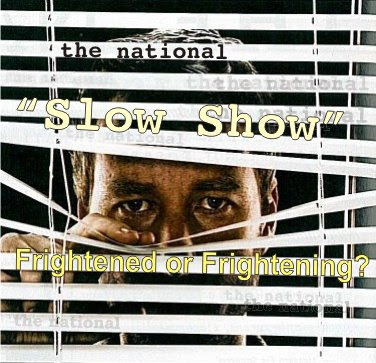 One of the biggest questions, and not to mention, hurdles, facing us as a planet today is whether or not Matt Berninger of Brooklyn based band The National utters the word frightened or frightening in the third stanza of the sixth song from their most recent album Boxer, their fourth (I'm just trying to keep with the numbers theme of this long sentence). This question arose through my posting the lyrics to Boxer here at Sixeyes in June of 2007, a few months after that The National, in a surprising move to me, linked my post of those lyrics on their website. That's why I threw up this post, I got a few comments about the song "Slow Show" and was running dry on ideas for this here blog. So, I've uploaded several different versions of the song, all live performances which range from the close-up intimacy of a Daytrotter session to a live festival venue such as Austin City Limits.

Now I stand on the frightenin' side of this debate (especially when I first get up in the morning... I'm very, very frightenin'). But I don't want to influence you in any way, so give these versions of the song a listen, preferably with earphones/headphones. And if you have the time, please leave a comment on this contentious issue.

Here's the song in question. Thank you and goodnight.

And if you didn't already know the band has a tour lined up for this spring, go here for the details.