The National: 2009 Spring Tour and More! 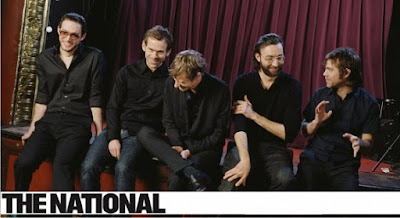 I just got some great news from The National:

Hello everyone!! We hope you're staying warm through the winter! Actually, it's 58 degrees in New York City today which is both wonderful and unnerving at the same time!

Meanwhile, we have lots of news to announce! Firstly, we have scheduled a short US / Canadian tour in late May. We'll be trying out new songs (!) and playing some old ones too of course! The shows are listed below with on-sale dates. You can find links to buy tickets here.

Secondly, the charity compilation that Aaron & Bryce produced for the Red Hot Organization, "Dark Was The Night", will be released this coming Tuesday, February 17th!!! (February 16th outside the US). Please help us support Red Hot's effort to raise money and awareness to combat the HIV / AIDS epidemic and go out and buy yourself a copy next week. It is well worth the money and you'll be contributing to an important cause. The record features 31 exclusive tracks and will be released digitally, as a double CD and triply vinly LP! You can learn more about the project and stream songs here.

Thirdly, if you live in New York City, be sure to catch Clogs (link to: www.clogsmusic.com), featuring Bryce, Padma, and Aaron along with special guest vocalists, on Thursday, February 26th at the Brooklyn Academy of Music. They’ll join Bell Orchestre (which features members of Arcade Fire) and the Brooklyn Philharmonic as part of BAM’s Shuffle Mode series. You can get 20% off tickets by using promo code 9826 when ordering their tickets by phone at 718.636.4100 or online at: http://brooklynphilharmonic.org/?q=shufflemode&subcal=true

Finally, tickets are available now for Bryce's contemporary music festival, Music Now, which takes place this year March 11th and 12th at Memorial Hall in Cincinnati, OH. Kronos Quartet will perform on both nights. The Books will also perform on March 11th and the renowned Kora player Toumani Diabaté will perform on March 12th. The first evening Kronos Quartet will play two new pieces commissioned for the festival, one from Tyondai Braxton, of Battles and one from Richard Reed Parry, of Arcade Fire and Bell Orchestre in addition to work by J.G. Thirlwell (Foetus), Glenn Branca, and Michael Gordon. The second evening the Quartet will explore music from around the world, including Africa, Mexico, India, Greece and the Middle East. You can learn more about the festival and buy tickets here.

Ok, thats all for now! Thanks so much!!