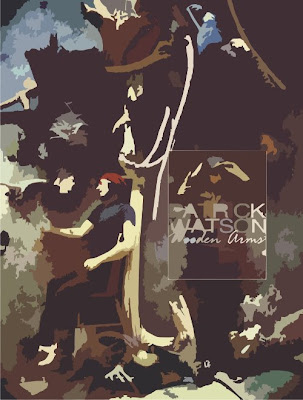 Polaris Prize winner Patrick Watson has returned with another collaborative effort enlisting the myriad talents of band members Simon Angell (guitar), Robbie Kuster (drummer) , and Mishka Stein (bass). Titled Wooden Arms it'll see release April 28th (Canada), May 5th (US), May 8th (AUS), May 11th (UK) + (EU), and June 24th (Asia). You can expect more of the soaring and swooping aural romanticism that permeated award winning debut Close To Paradise. But this time out the band have taken steps to keep themselves interested and excited about creating music, as Patrick Watson himself explains in a press release:

"We wanted to create folk science fiction music, like in the Twilight Zone, where there's a normal situation with a twist. There should be an innocence to it, a sense of a humble, grounded story with a subtle twist." The band also made use of such oddball items as a tree branch, a plunger, a megaphone and drawers in creating a palpable atmosphere.

"Our drummer, Robbie [Kuster] wanted to get away from drum kits"... continues Watson... "So he rebuilt things, including a bicycle, for percussion." The band played pot drums and a ukulele on the title track, using a bicycle for percussion on "Beijing."