The Veils to Release new EP 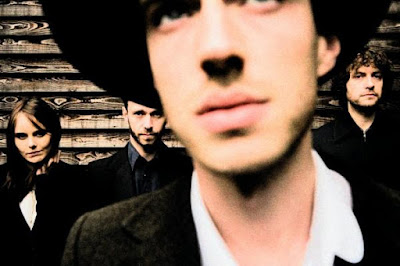 The Veils will release new music next month (January 24th) on their own label, Pitch Beast. The EP, titled The Troubles of The Brain, gives waiting fans six new songs with a seventh as a bonus for pre-ordering the disc (do so through the band link above). Three tracks have been streaming online for a couple of weeks now and here's how they stack up.

"The Stars Came Out Once The Lights Went Out" - For a verse or two, sounds like it's about writer's block and maybe it is, but through some musical magic Finn Andrews twists it into what most pop songs are about the longing for the opposite sex. This doesn't diminish the quality of the song, but another track , "The Wishbone", very nearly does, as it overshadows the other two streaming songs. The production's clean and open with what sounds like a twelve string guitar hooking me like a hungry fish trapped beneath winter's ice and snow. I'm loving this one right off the bat.
Number three is "The Bloom", the lead off track on the EP, and it carries a rhythm reminiscent of Springsteen or more recently Arcade Fire.... a warning - DO NOT play this track while in the proximity of any 'air' drummers.

Those familiar with the sweeping drama and roar of earlier Veils work will definitely hear something different here. I will hazard a guess and say it's just Finn and the others maturing, they've attempted to take control of their musical path with the start of their own label and this aggressive focus can also be heard in the succinct and tight writing from Finn Andrews. I love The Veils and this EP sampling hasn't changed that one bit... it's only reignited the passion. Bring on the New Year (or a promo copy).
+ the wishbone [mp3]
The Troubles of The Brain - Tracklist
Bloom
Don’t Let the Same Bee Sting You Twice
The Stars Came Out Once the Lights Went Out
The Wishbone
Grey Lynn Park
Us Godless Teenagers
at 4:00 PM