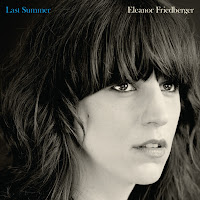 The more vocal half of sibling duo The Fiery Furnaces, Eleanor Friedberger, has her debut solo record set for release July 12th on Merge Records. Simply titled Last Summer the ten track album begins with mistakes ("My Mistakes") and ends with an earthquake ("Early Earthquake"), but it's whats in between these calamities, personal and natural, that intrigues me. Take the second track, "Inn of The Seventh Ray"... how did an L.A. restaurant end up on a record with NYC titles like "Roosevelt Island", "Scenes from Bensonhurst", and "Owl's Head Park"? But what really grabs me is the three song cluster, "Glitter Gold Year", "One-Month Marathon", and "I Won't Fall Apart On You Tonight". Maybe I'm just starved for some interesting music (and song title alliteration) it's just that I know deep down that Ms. Friedberger can give me what I need... and I can't guess what these songs are about until I've heard them. Yep, this is turning into a review of song titles.
I'll end with something I noticed in the PR on Last Summer, it states that Eleanor 'improves on silence', although so far it's only improving on anticipation, which can be a very good thing.
Don't miss the new video for "My Mistakes" below.