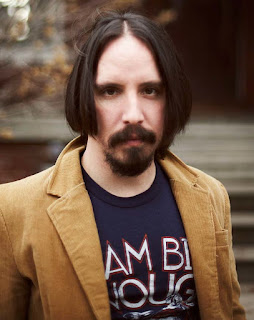 Born and raised in the small Ontario city of Guelph, Toronto-based JimGuthrie has quietly made his name by making a joyful noise. Guthrie is that special type of musician/artist who defies expectations by not ruling radio, by not moving a million units, by not being a judge on The Voice. He's the guy who has his peers praising his name.

Now after a decade of side-projects (Islands, Human Highway, Royal City), video games (Sword and Sorcery), TV work and films (The Manor, The Bodybuilder and I, Real Time, When We Were Boys, Indie Game: The Movie), he is back to being all about Jim Guthrie... ready to spread the joy of a new record. Takes Time, was released on May 7th via Static Clang.

Now this isn't a review, but if it was it would say things like:

Jim Guthrie was kind enough to answer some questions from his home in Toronto.

AW: I want to start off by saying how good it is to hear real instruments used to deliver pop songs.

AW: Now, why so long between solo records, and why assemble songs written over five or six years? Was that also the case for 2003's Now, More Than Ever?

JG: I'm not really sure. I was keeping busy, but I've also never thought of my career in a way that dictated a "regular album release schedule". I would have loved to release one sooner, but I was getting work as a musician doing music for film and TV and released several other albums during this time. No More Than Ever came out less than a year after my second solo album Morning Noon Night.

AW: The record is made up of songs from 2007 to 2012, just how many songs did you have to sift through? Were the more recent songs written to fit what you'd assembled, or did everything just fit together?

JG: I recorded beds for about 13, or 14, songs... but only 11 made the cut. I didn't really have any lyrics written for these songs when I recorded the music. I wrote and recorded the vocals on most of them in the last 6 months, so in that respect, they are all pretty new. I always have lots of song ideas on the go, but I'm really bad at finishing them.

AW: OK, why would this new album be “best served on a good pair of headphones”, as you state on your bandcamp page?

JG: This pretty much goes for any record, but I had a moment after mastering this album where I made peace with it sitting in a dark room while wearing headphones. After that I thought it was worth mentioning. Headphones always reveal a side of music not perceivable on any other set of speakers.

AW: I loved the way you turned the well-known melody of the final track on your record, “Turn Me On”, into your own. I wondered what you know about the origins of that melody, what's its provenance, so to speak?

JG: I took my cues from Nina Simone's version of “Turn Me On”. She's easily one of my favourite vocalists of all time. I've always loved how simple a message the song has and how Nina Simone sings it with such complexity. I'm sure my vocal isn't as involved but that's what drew me to it along with the fact that it's so well written and recorded on every other level.

AW: Are you a fan of Elliott Smith? I hear definite echoes of his vocal when you double track yourself on songs like “Don't be Torn”.

JG: I like Elliott Smith but I've never owned one of his records. I can't even really name one of his songs off the top of my head. I've always double tracked vocals and other instruments but it was because of the Beatles and Sebadoh, etc.

AW: How did you get hooked up with the label Static Clang in Toronto?

JG: Friends of mine were releasing their records on the label (Minotaurs and Tusks) and I've also known Kevin Lynn (who runs the label) for 20 years, or so. It was a great fit because they didn't mind that I wasn't going to tour it much.

AW: I read that you were involved with the documentary, The Manor. Wasn't the film given the honour of opening Toronto's Hot Docs festival? Were you there? How did you get involved?

JG: Yeah, it was a pretty big deal considering it was a first-time Canadian filmmaker, Shawney Cohen, snagging the opening night at Hot Docs. I had worked on a TVO doc with Mike Gallay and Shawney years before and I guess my name came up when he was working on The Manor. I'm actually from Guelph (home of the Manor*) so it was sort of extra special to me to be able to work on the film. I've still never set foot in the Manor (yet?).

AW: When you listen to your music, as in the studio when recording, what do you hear in the way of influences? Do you even hear your influences at all?

JG: I definitely will hear how a song of mine might resemble another song and I may even try and learn something from it but I'm mostly trying to figure out what the song needs on it's terms.

AW: From looking at the shows page on your website I see you don't play live very often, or at least you haven't in the past year. Why is that?

JG: I really don't get a lot of pleasure from playing live. I've always struggled with it. I've never felt completely comfortable being a band leader, or being the center of attention. I'm lucky because I'm working on so many cool projects that I can decide how much I want to play these days and I won't starve if I don't, ya know?

AW: Are you a studio gear head? Do you live in the studio, working all night?

JG: I have a bunch of gear crammed in my basement and, yes, I spend almost all day / everyday down here. I'm always working or tweaking something. It's always been my dream to have a room full of noise makers and now it's come true.

JG: I have a show at Hillside* this year in Guelph and I'll probably play a few shows in the fall. I have some stuff with the NFB (The National Film Board) to work on along with another film (maybe) so we'll see. Always lots to do!

AW: One last thing... If you tell someone, and you have, that they have sexy ears, what does that mean?

JG: I think it means that they have a talent for writing, recording, mixing, etc., music... but it also might mean that I want to suck on them.

*Hillside Festival is a very successful event held every summer in Guelph. Many of the biggest Canadian indie acts have performed there and likely will again this summer.