The National: 'Trouble Will Find Me' Album Review 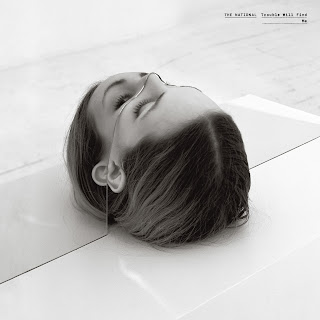 The National, whose music many have labeled as gloomy, dark, and writhing with insecurities, stays the course with their latest, Trouble Will Find Me. But the biggest difference between this album and any previous is the band members have settled into themselves (the members ages now range from late thirties to early forties) and this comfort has eased tensions that would surface during the quintet's creative bursts of writing and recording earlier records. While tension, anger, and testosterone, definitely birthed live stalwarts such as Alligator's (2005) “Mr November”, this record sees the writing and recording process operating the way they always wished it would. The smooth sailing has unveiled some fluid and effortless tunes from the songwriting triumvirate of the Dessner brothers and singer/lyricist Matt Berninger. Upon first listen you may find yourself caught in the slowly measured swing of “Pink Rabbits”, but the song that should stick after many more listens, is the opener, “I Should Live In Salt”. Which is likely the best song Berninger has wrung out of his own life, writing the lyric after his brother, Tom, hired as a roadie for the band's High Violet tour, was fired. Here, his vocal, morose and restrained in the verses, as he asks his brother for forgiveness, gives way in the chorus as his guilt finally cracks and spills out. The musicians matching the singer's pace as the music softly throbs in the shadows until that guilt snaps into anger. All along the lyric hanging on the slow beat and then left dangling and drawn out on the soft hiccup in the song's meter. It's an unusual cadence which may first repel, but slowly becomes magnetic.

But there's much more, the chiming lilt of “Heavenfaced”, bearing an upper register vocal which lifts an already lovely melody and the bass heavy Joy Division throb of “Graceless”. But a standout is the overwhelmingly low-pitched solemnity of “Demons”, and it's self-punishing bridge with the line “When I walk in to a room I do not light it up... fuck...”. Although well-known indie names like Annie Clark (St Vincent), Sharon Van Etten, and Sufjan Stevens have lent voices and musicianship, what they've contributed is woven into the band's distinctive fabric and as a result doesn't stand out, or detract.

While the band is still conjuring brilliant echoes of musical heroes like Springsteen and Joy Division, the magic here is all The National. Trouble Will Find Me is the band somewhere between testosterone soaked reediness and Viagra popping paunch. Mature, responsible, confident and yet still keeping a closet brimming with anxiety, guilt, fear of the unknown and spectacular songs.


Trouble Will Find Me, is slated for release May 21 in the US and the 20th in Europe.