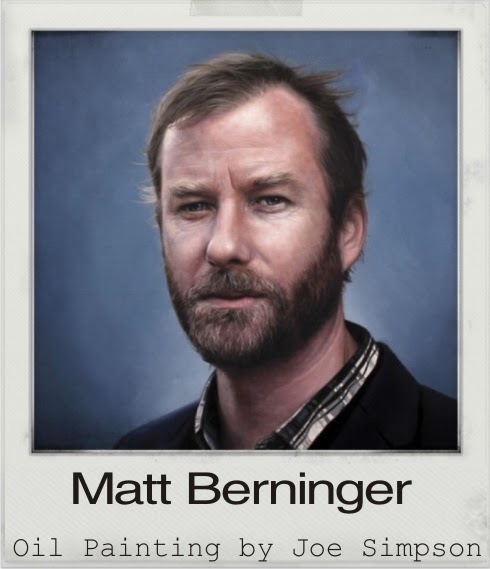 
A negative plus a negative is a negative. Someone worked that out long ago, but don't tell that to Brooklyn's The National. Although, from the beginning the negatives did start piling up. A band name chosen because it was 'benign and meaningless', a website domain that came from a song off their self-titled first album, a media image littered with detrimental terms; sad, gloomy, anxious, neurotic, morose, even suicidal. And if you go all the way back, friends Matt Berninger and Scott Devendorf first played together in a band called Nancy... named after Matt's mother. Obviously, the band name problem was there all along. And yet, somehow, despite these and other drawbacks, and while nestled in one of the most expensive cities in the world, they've thrived. Starting in 2005 with Alligator, when they appeared in several major publication's 'Album of the Year' lists. Next up, 2007's Boxer, and even more accolades, Paste Magazine declaring it their 'Album of The Year' while numerous websites ranked it one of the decade's best. The spring of 2010 saw High Violet's release and the floodgates burst. Topping first week sales charts in countries around the world the band took to the road with sell out dates on each continent they landed. And now they plan to convince us (again) that a negative plus a negative can equal a positive, if you work those worry beads long enough. Their sixth full length, Trouble Will Find Me, is slated for release today, May 21, in the US.

The anxious, but positive, Matt Berninger, answered Alan Williamson's questions in early May 2013.


AW: Listening to opening track “I Should Live in Salt” with the knowledge that it's about your brother brings it into a much more melancholy light. Is the song about the angst generated when he was your roadie, or is it reaching back to when you were younger?

Matt Berninger: I was thinking about how I left for college when he was nine years old. Probably right when he was about to need me the most. I missed him a lot over the next 20 years and when he came on tour we were able to reconnect as adults. It wasn't always good though and you'll see that in the movie (the documentary, 'Mistaken For Strangers', directed by his brother, Tom Berninger). I had to adjust to the fact that I couldn't really shape him anymore. I couldn't be his "older" brother anymore. I needed to just be his brother.

AW: When did you write the lyrics?

MB: After he got fired from the tour.


AW: The unrecorded song “Rylan” (the band performed this song live on CBC radio's Q three years ago) isn't on the new record and I wondered what happens to songs like this? Is it like losing touch with an old friend, like they've moved away, or realizing that you just don't have much in common anymore?

MB: “Rylan” will come out. It just didn't fit into the mix of these songs.


AW: Well, “Rylan” is an odd name and your new song, “Heavenfaced”, is an odd title, being a made-up word. High Violet also had one in “Lemonworld”, is this something you do often, make up a word, or words?

MB: Vanderlyle is also a made up name/word.

AW: Did you know that making up words is a symptom of some mental disorders?

MB: I didn't know that. Makes sense though.

AW: How does that make sense? Just how often do people tell you you're crazy?

MB: No one tells me I’m crazy but, I can see how when the world becomes a place you can no longer connect with, one might be inclined to invent their own world, including language.


AW: The past few albums seemed to have a strong design identity with, I feel, Boxer (2007) really bringing a sharp distinctive image to the band... how much input do you and the others have with this aspect of promoting your music?

MB: Normally Scott (Devendorf) and I do all the design stuff... mostly Scott. This time however we collaborated with a London based French designer named Angela Bollinger aka Angela LaFont. She's the one who found the cover image. She also helped with the type design of both the record and my brother's movie 'Mistaken for Strangers'.

AW: Trouble Will Find Me has a strange cover photo, one which makes me uncomfortable the more I look at it. What's going on with that picture?

MB: It's a photo from an installation by the artist Bohyun Yoon . Lots of naked people and mirrors. We like the image because it's creepy, goofy and sexy at the same time. I also like that there was no Photoshop or trick photography. Just a face and a cut mirror.


“I'm having trouble inside my skin, I tried to keep my skeletons in...” - “Slipped”


AW: There've been rumblings online about several collaborators contributing to the album like Sufjan Stevens and Sharon Van Etten... what's the band looking for them to add?

MB: We've become friends with a lot of very talented cool people over the years. They either just come by the studio and hang out or we email them files and ideas. We're never looking for "cameo appearances." We often weave their ideas and contributions into the songs in subtle often invisible ways. But if you listen close you'll hear everybody.

AW: Other than those different faces in the studio, what do you think sets the making and writing of TWFM apart from High Violet?

MB: We actually had almost all the same people in the studio with us on HV so it's similar in that way. The main difference with TWFM is that we all got along better than we have on previous records. No one wanted to kill each other this time. I think we reached a level of perspective and respect for each other.

AW: By “got along better” who are mostly referring to?

MB: Aaron and me.


AW: How would you describe yourself when writing songs? Songwriter, lyricist, poet, musician, or do you have your own word... and don't say douche bag?

MB: Songwriter. I tried to coin the term Wordsurfer, but it didn't stick.

AW: Wordsurfer sounds like a superhero. Sounds like you want to join the Avengers? What powers would you have?

MB: No powers. With power comes responsibility and I'm lazy.

AW: Were you into comics at all as a kid? Or now?

MB: I was more of a National Geographic kid.

AW: So you were a reader? What books did you read?

MB: 'A Separate Peace' and Hustler.

AW: Okay, I can see how Hustler came into play in your songwriting, especially “All The Wine” with the line “... I'm a birthday candle in a circle of black girls...”. What else am I missing?

MB: That line actually came from 'A Separate Peace'.

AW: What? I guess I'm missing a lot... I've never read the book. So, is this an actual line or image found in the book? What part of the story inspired “... I'm a birthday candle in a circle of black girls...”?

MB: I was just kidding about that... my imagination inspired that line.

AW: So maybe I was right... again that gives a whole new meaning to a line like "high beams on my back". And also the song "High Beams"... Wouldn't you say? Or am I way off track?

AW: When I was a kid that was a slang term for erect nipples. Maybe things have changed, I am older than you, or maybe I grew up in Larry Flynt's neighborhood.

MB: That's way better than mine.


AW: You said 'A Separate Peace' was a book you'd read as a kid. And that book begins with the main character returning to the school he attended as a boy where he visits two, what he calls, “fearful sites”. If you return to your boyhood home what would you consider fearful sites and to keep things upbeat, happy sites?

MB: When I think about being a kid almost all of my memories revolve around my Uncle Jack’s farm in Dillsboro, Indiana and my 5 Indiana cousins, whom my sister and brother and I referred to collectively as The Farm Kids. Most of my memories from that time and place are good. We spent summers there working in the tobacco fields which later turned into Christmas tree fields when my Uncle was ethically compelled to change crops. We swam in a deep gorge that ran alongside a railroad track. Legend had it that in the 20’s a passenger train derailed and one of the train cars full of bodies was never retrieved from the bottom of the pool where we swam. The rock walls of the gorge were covered in graffiti. I remember lots of cocks and pot leaves but also the occasional pentagram and swastika. My uncle had us paint over those when they appeared. I also remember one night when we all decided to camp out on the coldest night of the year in sleeping bags around a huge fire. I woke up in the middle of the night with my bag on fire. I was uninjured but the soles of my army boots had melted off.


AW: From “Demons”: “When I walk into a room I do not light it up... fuck” - Do you feel that's what some people, or fans, expect of you? To light up the room? That you're the point man for their favorite band and you're going to blind them with a rose in your teeth.

MB: No. It’s just a simple reflection on social anxiety. My brother on the other hand does have a way of lighting up a room when he enters. He has an instant charm and magnetic vibe about him. He’s a fuck-up in many other ways but there’s no doubt he possesses a strange intangible quality that people are drawn to. It’s why he’s the hero of 'Mistaken for Strangers'.

AW: You're on record stating that wine is how you loosen up, or drop some inhibitions before you take the stage to perform... what about in studio? How do you go about bringing forth a more uninhibited performance when recording?


AW: On the topic of wine... I came across online where your brother Tom says that part of your pre-show ritual is to drink a 'shitload of wine'... is there anything you could share about the pre-show rituals of the other band members?

MB: Those are their secrets. I don’t feel comfortable speaking about this, but Bryan spends A LOT of time in the bathroom before every show. Mostly adjusting his wristbands (and Bryce ritually kills a canary).

“Let's go wait out in the fields with the ones we love..” - “Heavenfaced”


Bryan's wristbands and Bryce's canary supply will be packed and out on the road, as the band begins touring Trouble Will Find Me on June 4th in Providence, RI.