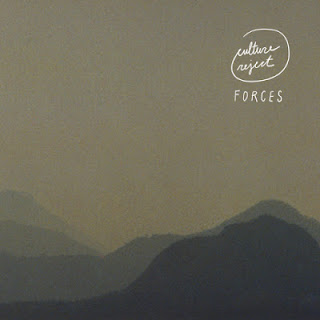 Back in 2009 Michael O'Connell released his debut as Culture Reject and it floored me. Fantastic rhythms, mesmerizing vocals, unexpected shifts and turns, a roller-coaster of personal tales that swayed as much as they bounced and snapped. I also spent a great night in Guelph, Ontario at the sadly departed Carden Street Cafe listening to Mike O'Connell and some friends get the dimly lit little place bobbing their heads in unison.

Now six years have come and gone and I'm happy to say that Culture Reject has returned. The new Forces EP is bursting with his familiar sounds and yet open, airy, pulling in almost as much as it's pushing out, leaving space that attracts the ear. You may not notice these little pockets of vacuum, but they make room for sounds to linger, for anticipation to grow for the next shift in tempo, the next note. Culture Reject's Forces is full of these little holes, like an inverted night sky pricked by tiny black stars. This is the magic of a well arranged piece of organic music, not only do the spaces, or gaps, unknowingly attract the listener's ear, they are pulling and pushing the music along, as well.

The EP opens with "Avalanches" and O'Connell's strongest  asset as a songwriter, his sharp, compact, and simple guitar lines delivering a song's hook painlessly and with the contradictory promise that you will feel something. On a near par with this distinction is an ability to sew together intricate patterns with the layering of voices used as wordless instruments, skittering percussion, and those singular guitar parts. These qualities carry throughout this hefty six song EP, from the aforementioned "Avalanches" quiet groove to the melancholy "In my Lovin' ", with lonely guitars and longing falsetto, to the chattering rhythms, talk-sing vocal, and chiming counterpoints of standout "Talkin' Easy".

Don't take this the wrong way, but if Justin Timberlake lived in Silverlake and was pals with Beck, Sofia Coppola and Ryan Gosling and went all indie, this is pretty much what I'd expect to hear. Hold on, don't move on just yet, he sounds nothing like Timberlake, it's an analogy. What I'm saying is that under other circumstances, different influences, different dreams and desires, Culture Reject would be huge... but then it wouldn't be Culture Reject. It would be some poor guy mass marketed to the 18 to 29 year old demographic. But it isn't.... it's Culture Reject.

This is a lot of talent, big talent, here in Mr O'Connell, with a craft that, sadly, connects with a smaller audience; believers who appreciate art and can be inspired to make their own. So, make something... make a move and join the smaller audience. Unplug the mainstream, it may be tough, but abstinence is the way to go; Culture Reject is back and what a relief.

(Watch for an interview with Culture Reject a.k.a. Michael O'Connell next week)