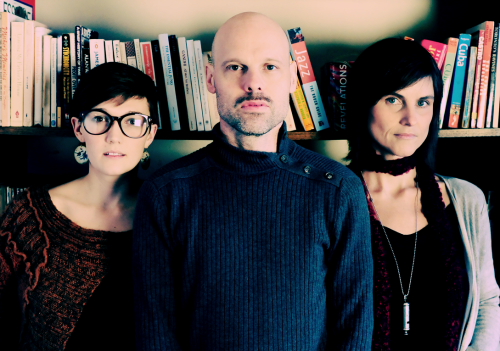 Culture Reject is Toronto based Michael O'Connell, a musician, songwriter, and you could probably throw in teacher and social worker. After learning more about him he is, as is usually the case, more than he appears to be, he isn't just some guy who makes music, it appears to me that music makes him. Michael was kind enough to find some time to answer a handful of questions for Sixeyes:

A. Williamson: Hi Michael, first I want to know about the name, it's very distinctive... where did it come from and why not use your own name for what is essentially a solo project?

Mike O'Connell: There are many Michael O'Connells in this world.... maybe too many. I also wanted a name that could bring musicians in when needed and an easy opt out when I preferred playing solo or with other musicians. The name Culture Reject came from a lyric in "Inside the Cinema" which is a song about people (primarily homeless or street-involved.... also queer and transfolk) who I witnessed articulating their critique of the world that rejected them with such pointedness and accuracy that I realized people opt out of the mainstream for many reasons. I then started thinking in the larger social picture about belonging and the pressure to fit in; the elusive and also obvious benefits of belonging; our struggles to fit in, but how in those struggles, we let go so much of who we truly are. It's a question and sometimes crisis of identity. I think when people are honest about who they are they become increasingly aware of their own power and control to reject the rejectors equally. I also think it is arguable that we are all, at one time or another, alone and as rejectable as anyone else is in a culture that encourages or fosters divisiveness based on identity.

AW: Six years have passed since the debut release, how have you been keeping busy musically? Touring, producing, recording, session work?

MO: I have been writing and playing new songs with two wonderful singers: Karri North and Carlie Howell in Toronto. Since the debut I have toured Europe, Iceland and the US three times. That's how I formed a relationship with the French label Specific Recordings (in Metz). I started writing a little more towards a three person band formation, but still write for the orchestra in my head. I also have the privilege of operating a recording studio (sketch.ca) in the Parkdale neighbourhood of Toronto that serves young people living on the streets or on the extreme margins. We make A LOT of music.... grindcore, dubstep, old timey banjo folk, accapella, rock, rnb, Cumbia... and collaborations of artists who come out of those genres and are willing to play to make new sounds. It's an honour to witness and even more so to produce and facilitiate.

AW: How did it come about, the recording studio for young people living on the street? Was there one event, or experience which triggered the idea?

MO: It grew out of an initiative of artists who recognized the need to address the systemic barriers faced by people who are homeless and marginalized in the city.  The goal was and still is to offer art space, instruction and materials to allow people greater health and to increase control over the lives.  I was fortunate enough to be asked to coordinate the music studio.

AW: How do you choose the people you have playing on your recordings, or play live with?

MO: It's definitely a taste thing. They have to bring a passion for what they do musically, but also be willing to take on my musical vision. Often that means accepting the parts that I'm doling out. I've had horn players who I respect massively, look at me and say "that's more of a guitar line you want me to play on the sax... I don't think it translates." But they'll do it and they'll find a way to make it pleasing to my ears. I'm lucky that people are willing to embrace and contribute to the kind of music I hear and the way I want to express it.

AW: Do your songs grow out of jamming? I get a loose nearly funky feel when listening to much of your music.

MO: Not really. I really spend a lot of time recording. I guess I then jam with myself in an overdubbing kind of way and begin to come up with countermelody and melody to chord structure (it is, after all, just a form of pop music). The vocal arrangements are a little more collaborative and I owe a lot to Carlie and Karri for hearing and speaking up about what they think works best.

AW: Forces is on a French indie, Specific, how did you choose this label? Or was it more them choosing you?

MO: Florian Schall is an audiophile, super passionate vinyl lover, musician and community builder from Metz, France (he's the one that booked the band METZ before they were called METZ... but after that gig they took on the name...). He (and his partner Jennie Zakrzewksi) told me he was sick of a world that didn't have new Culture Reject music and told me to put together as many songs as I could and he would release it on vinyl. That's what happened. We're planning a vinyl re-issue of the debut record and a new collection of Culture Reject songs in 2014.


Culture Reject's latest recording, the 'Forces' EP, is now out and available on iTunes, bandcamp (vinyl), and via his Canadian label White Whale Records.

Read Sixeyes review of 'Forces' and hear the entire EP.