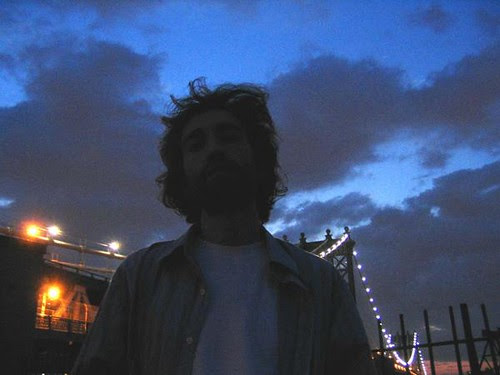 Dave Deporis was a name I hadn't come across until Thomas Bartlett, who writes the Audiofile page for salon.com, introduced me to him in a post a little over a week ago. Bartlett is also in the band Doveman, by the way, but this is about another New York musician, Deporis.

His music, Deporis's, is a treasure, buried away from deserving ears, from unknowing ears, but it merits, if not desires, an audience. A voice which does not overpower, nor take the breath away, but commands attention with it's presence. The man, like his music, is vaguely mysterious and although I posed him a series of questions I have not solved the mystery, just made it more tantalizing.
++ ++ ++ ++ ++ ++ ++

*Sixeyes: Could you tell me about your background, where you grew up, went to school, your first steps into the world of music?

Dave Deporis: Childhood seems like a dream, lived along the coastal towns of Florida. I began to sing late at night on the beach to other peoples music, then my own. I was, however, born here on Manhattan island, from where I am typing you now. So before I left to Florida with my family, I have earlier memories of subway trains as rainbows of color and carriers of all varieties of people as well as the grit and grime.
There is an indelible part of my psyche informed by the urban and the frenetic, as well as a deep love for the land beyond the cities, the oceans and seabirds, the mountains and streams, the desert and sand dunes, the places where life slows down and the face of nature reveals itself to you.

*Six: Is recording, as you do, with little instrumentation and your lone vocal, a result of your situation or an aesthetic choice? Have you ever played in bands, or always solo?

DD: Hmmmn, it is a bit of both really. I am open to any combination of ingredients in order for the song to come across in the most meaningful way.

LOUUUUDDD... drums pounding holes through the CD cases, crumbling, gnawingkicking at the foundations of the Tower records - Lawrence Welk's trembling hand reaching out from the rubble -fireman? f-f-fireman? Or soffffffftly.... my voice and guitar huddled over a microphone... whatever the song wants really, I am simply in the business of midwifery.

*Six: From what influences does your music arise? Is there one musician or song that spurred you to record your own music?

DD: Well Alan, it's difficult to pinpoint the places and events that push one into their future.

I remember getting a dubbed tape of REM's Green when I was around 13, and that album exploded the idea of what music and musical communication could be. At that age, a good record can seem to be communicating just to YOU, you know?

I'm of the belief that the emperor has no clothes on to speak of so whenever pirates, spiritual seekers, fierce musicians, gentle musicians roll down the river of commerce offering something real, I take heed and notice. And often become a fan.

*Six: Now I'm wondering if you ever perform covers on stage and what they would be?

DD: Rarely. I sang "Little Red Corvette" at a karaoke bar the other night and it was rather brutal. But on the right night, if a cover song can reach an itch that none of my own songs can scratch, I'm happy to do it, absolutely...

*Six: Your lyrics are very rich with imagery, do you see lyric writing as poetry? For that matter have you put your hand to the art of verse?

DD: It can be a poetry. The key is to get the words dancing with each other, like shy children at a middle school dance... IT's all about losing fear and inhibition, C'mon kids!!!!

*Six: Please tell me about your new recording, For The Birds And Children, are "Ghostly Baby", "Swan King...", and the others on your myspace page from this record? Was the project of getting these songs on tape similar to your other releases and when will the new recording come out?

DD: The overall mission feels the same as before, to bring the songs to life in the most graceful, natural and compelling way, so they can convey what they need to convey. As "For The Birds and Children", it will be primed and ready for peoples ears really soon, though no exact date is set...in the final stage of recording now.

*Six: It's been my experience that many musicians are creative in other forms of media... do you express yourself by creating other forms of art in addition to music?

DD: Regrettably, not as much as I'd like. I do make crude drawings and give them to my friends, though, in the great white spirit of multimedia.

*Six: Is there a position or goal you wish to attain through your music? Is it fame, enlightenment, understanding, love, friendship...?

DD: Good question and honestly, I don't think about this much. Beyond the goalposts of this soccerfield waits death so really I'm just enjoying the ride. Like children, I don't want to tell these songs what to do or how to grow up. I remember squatting in Boston some years back and it was maybe 1 or two degrees above freezing, snow on the ground, and I went to the park in Cambridge and sat down with my guitar and played. Before long, I was surrounded by around a half dozen children, I mean young children, like 8 or 9 years of age, and with no parents!! And they sat there and I played music for them for about a half-hour, they all had such gleams in their eye. It's moments like those, where music exists outside commerce and posturing, the shared human experience of it that really makes it worthwhile to me and reminds me how sacred it is.

*Six: Finally, Dave, what will you be up to the rest of this year?

DD: Getting this Arcade Fire song out of my head... Lies, Liiies! (ed: not familiar with Arcade Fire's "Rebellion (Lies)"? Then click here to download), savoring every page of the Wind-Up Bird Chronicles by Haruki Murakami, working, trying to be an upstanding member of the human community. Maybe go exploring this planet,.... Oh yeah, kissing, lots of kissing....

More here on his myspace page.