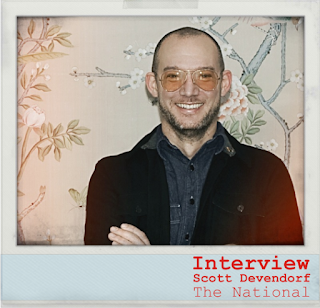 Okay, it wasn't easy, or necessarily legal, but I tracked down The National's bass playing Devendorf, Scott, for a little Q & A before he and the band headed out on a worldwide tour that takes them close to year's end. But don't worry, this is likely just the first leg, you just might get to see them twice.

AW: I'd like to start off by getting your feelings about the six hour performance of the song “Sorrow, which the band performed at the Museum of Modern Art as part of Icelandic artist, Ragnar Kjartansson's exhibit titled 'A Lot Of Sorrow'. Was it what you expected?

SD: This actually turned out to be surprisingly fun and … educational. To play the same song over and over (and over) was sorta meditative and actually helped build up endurance for new shows and touring. All our practices should be like that! Ragnar was great to work with and a really positive and fun person.

AW: Was employing a new producer/engineer after Peter Katis had co-helmed 4 records an attempt to get out of a rut, or to grow as musicians?

SD: I think we always try to do our own thing—as far as production everyone in the band is very opinionated and involved. Working with Peter Katis has been great for us on past records, and Peter mixed “Sea of Love” on the new record, on this record we worked with Craig Silvey, which was awesome too. We mainly wanted to try some different ideas sonic-ally, as far as mixing process and production.

AW: Matt has said there was less friction in the studio this time around. How much do you think this is down to Craig Silvey?

SD: I think it was due to the band just getting along and playing better together and respecting each others strengths and space. Craig is a great engineer and super guy with great energy and that certainly helped us get through our always lengthy mix process. I’ll also give credit here to Eduardo, Craig’s assistant engineer for all his help!

AW: Are there any new songs which you enjoy playing more than others?

SD: I really like “Graceless”, “Humiliation”, “Slipped” and “I Should Live In Salt” – but they are all new right now and it’s fun to discover new ways to explore within the live set.

AW: And which National album stands out for you? Not music-wise, but for the experience of making it?

SD: Probably Alligator, since we were rehearsing, writing and recording a lot of that record all together at a fun time in our lives in Brooklyn – it was an enjoyable process and fun to hang out together. And for those same reasons Trouble Will Find Me as we re-engaged in that sort of friendship and music-making – it was refreshing.

AW: Alright, of all the little things that have propelled the band... what was the 'biggest' little thing that helped get you to where you are now?

SD: I think it’s been our perseverance and friendship/family bond that has kept us together – and it's certainly fun to make music together. Probably a lot of little things really – grassroots touring, and doing everything ourselves early on helped us a lot.

AW: You're just now heading out on tour, so, of the many cities you've played, which would you return to as a tourist and why?

SD: Istanbul, Lisbon, Rio de Janeiro and Amsterdam - many stand out, but there’s a lot of choices, if only we had some time to be tourists … someday.

AW: You've been schooled in graphic design and do much of the artwork for each release, isn't that right? So you likely have a strong interest in art... who do you like in today's contemporary art?

AW: Finally, how surprised were you at the reception Tom Berninger's film of the band's High Violet tour, 'Mistaken for Strangers' got?

SD: We were so happy that it was chosen to open the Tribeca Film Festival – it was great and crazy to see it on the large screen and see Tom and everyone made me very proud – it was a long and at times difficult process for him to make it so it was a major triumph to see it as a real thing in the world. Nice job, Tom!

Email ThisBlogThis!Share to TwitterShare to FacebookShare to Pinterest
Labels: interview, scott devendorf, the national, trouble will find me