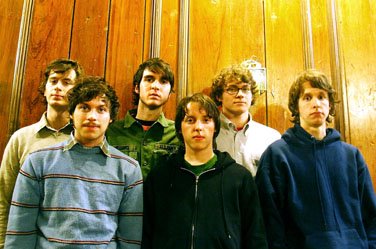 The Spinto Band are from Wilmington, Delaware, a city with many ties to history and tradition, as most American east coast cities do. And the band Spinto, as well, has ties to history, and in a sense, tradition. Key founding member, Nick Krill, discovered the spark which set the band in motion while sifting through his late grandfather's belongings close to ten years ago. Roy Spinto, Krill's grandfather and a guitarist, lived down in the Mississippi delta where he practiced the odd habit of scrawling original songs on the inside of Crackerjack boxes. These songs were the impetus that Krill needed to start off on a creative journey leading to the formation of the Spinto Band. Now after seven albums the six man outfit have moved past bringing those songs to life and now pen their own quirky indie music; they have also earned deserved comparisions to bands like The Flaming Lips and Pavement. The band is currently touring their latest effort on Bar None Records, Nice and Nicely Done, in the UK. With only a few shows left [overseas that is, they return stateside to continue touring], here are the dates and some free mp3s...

OF COURSE you can find Spinto Band's great Nice and Nicely Done record at eMusic. And if you've taken eMusic up on their free trial offer and you've got a dozen or so downloads left, go here. And if you haven't taken the leap... what are you waiting for? Go here now.
at 8:00 AM