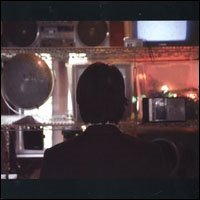 On Ill Lit's third full length, Tom Cruise, Daniel Ahearne's soft vocals blur the sharp images of his lyrics just enough so they don't snap you from the lovely drowse of stately album opener, "Across Country". This is how the songs operate: soft voices, sharp words. Plus, of course, the subtle picking of strings, tinkling of keys, and tapping of metal and skin. This includes the glowing and understated electronic sounds, as well. Sounds as warm and smooth as black river stone. Standout tracks include the aforementioned opener ("Across Country"), "The Bridge in Tracy", with it's soaring melody and sharp lyrical hook ("The last thing I remember/was the first thing you said…"); the smartly observed "Los Angeles", and album closer, "You Left After Work", which again bears the seamless vocal harmonies and bittersweet tinge illuminating the best of Ill Lit's work.

On Tom Cruise, Ill Lit bring the cold frequencies of electronica back to their warm roots, kind of like Calexico meeting Iron and Wine meeting Wilco on the short-wave radio band. Rich and intelligent, Ill Lit's music will make you smarter… and richer, if you know what I mean.

Alan Williamson does not have six eyes, no matter what you've heard.
at 2:45 PM