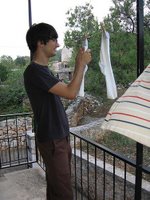 David J (Jerkovich pronounced Yer-ko-vitch) plays guitar for other bands (Kind of Like Spitting and Ill Lit among others) but he's got the talent and skill to write and record his own songs under the name Novi Split. About to see release on Hush Records is his latest record, Pink In The Sink. Jerkovich shares a musical warmth as Novi Split, his voice right up against your ear... the music percolating between electronic touches and organic wood and strings. The sound is similar to one band he has done guitar work for, that band being the aforementioned Ill Lit (see the *sixeyes review of Ill Lit's latest here). Opening Pink In The Sink with the lovely melody borne by "You Got Served", and following with the sweetly delivered "Voices Carrie", with it's sharp piano notes and rustling violin, David J makes it adamantly clear that these songs mean a helluva lot to him and that makes this a recording well worth your time, one bearing honest feelings delivered in the art of song. A standout track isn't easy to extricate from the best of this bunch, but "California Skies", with it's overwhelming sunstroke of sounds from guitars, electronic flourishes, and multi-tracked vocals, rises above the others. 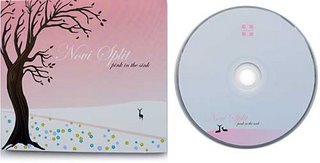