Here's what you've been waiting for, part two of sixeyes interview with JV. If you missed part 1, with talk of sex on desks, Don Rickles, and Rhythm Ace drum machines, PLUS the exclusive premiere of "Numbered Lithograph" Live at Tiny Telephone, you can jump back to it right here.

SIXEYES: With Bowie being your hero, do you aspire to reinvent yourself, if not image-wise, but musically each time you set out to make a new record?

John Vanderslice: Oh yes, but I never do. Isn’t that strange?? It seems like an easy thing to do... I really admire how Bowie changed musical styles like actors changing roles. Genre was like clothing in theater, something you inhabit for effect. Now I know how difficult it is to take those clothes off!!

SIXEYES: You've penned a number of songs that deal with and/or are set in Baghdad (the obvious being "Plymouth Rock" and "Trance Manual", and now you've advanced to the point where you are naming your upcoming album after a section of the city. I've got to ask if you've ever been there and if not, what have you read or seen that has affected you so much that that city keeps reappearing in your work? 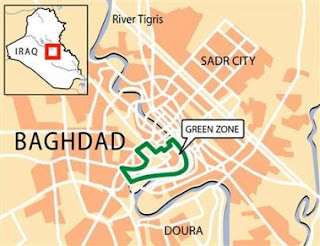 JV: Well Baghdad city seems to be the epicenter of so much American folly. In the middle we've got a heavily fortified green zone, where we're building a billion dollar US embassy, by far the largest in the world. It's on 104 acres and half of the 5,500 employees are security. This is INSANE! But fascinating, right? I mean, why? It's the one of the only projects we built in Iraq that was delivered on time. And another indicator we're never leaving.

I've never been to the Middle East. I would love to take that drive from the airport to the green zone.

I don't think I really understand why we're there. Oil, China, heartland theory, funding a shadow government, yes I'm sure all those, but there are other reasons I haven't figured out... and that keeps me coming back to Iraq.

SIXEYES: This has nothing to do with the new record, but a while back I was listening to "Big Band Stars” and got a strong impression from the lyric that you were perhaps a fan of Melville’s Moby Dick? And that thought came back to me when I read something you’d written on your website about hurling a harpoon into black water. Does the story of the whale hold special significance for you?

JV: Oh yeah, Melville and Chaucer were the two big things for me when I went to UC Berkeley. I think anyone who tours and makes music over a long period of time must be haunted by some unknowable monster!!

SIXEYES: Just what is the plan for promoting the new album? Is the main thrust going to come from blog interviews and previews on blogs like Sixeyes, or are you going to lay down serious cash on a half page ad in an indie mag, or two, or three?

JV: Well, we're trying to do something different from our past records. I personally live on the web, so that's the place I want to push the record. We probably won't have any print ads for Emerald City. Everything is different now, and by the time my next record comes out we'll have to rethink it all again. 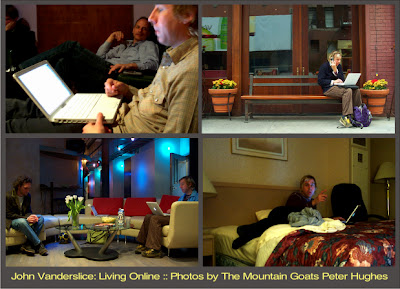 One thing that has to go: the three to four month lead time for a record release. This is retarded! That’s all to set up national press. Can you think of anything slower and more 20th century than doing something FOUR months in advance to get a record review? Shit, there's tons of nights where a blogger emails me THE NIGHT of a show and has written and photographed extensively about the performance they saw two hours earlier. That’s more my speed.

SIXEYES: Who shot and edited the Tiny Telephone Emerald City Tour film? And did you get involved in any way with the post-production?

JV: Scott Ottaway was the mastermind. He contacted me about filming a show in Seattle and I thought he'd be a natural. He brought two camera crews down to Tiny Telephone and kept everything rolling. I wasn't very involved in the post-production. I was too busy with my pit-bulls (it's dog-fighting season here). I told Scott I wanted as few cuts as possible, and for him to keep it very natural and unprocessed. He did a wonderful job.

SIXEYES: How long a process was this? Was it an all day affair?

JV: Two 14 hour days. By the end we felt like prostitutes on Super Bowl weekend. Whatever that means :)

SIXEYES: And I'm curious about who came up with the idea to shoot the film and offer it to favourite blogs of yours? Also, was this in any way to deter the entire album appearing as mp3s as soon as it hit the shelves?

JV: It was Barsuk's idea!!! Which is great because they can't blame us if it all goes wrong. Ha!

No it wasn't done to deter any p2p sharing. More of a way to show appreciation to fans and blogs for the support. And also to prove we can actually play these songs live!!! 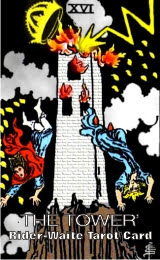 SIXEYES: In the song “The Tower” you mention Tarot cards and I’ve seen a deck of Tarot cards in a picture of the console in Tiny Telephone. How heavily are you into Tarot and that kind of thing?

JV: Well, I love the Rider-Waite-Smith deck; I think the narrative ideas in it are fascinating. The song "the tower" is about the perils of ego and hubris. As far as my own beliefs, I am a godless soul who doesn't buy any of it.

SIXEYES: The current press release on Emerald City says that you wrote the bulk of the record while attempting to get your French girlfriend a visa, has that situation been resolved? And what did you learn, or are learning, about your government from this sad state of affairs?

JV: Well we're still dealing with all of that!!!

Well, I certainly learned that you need to constructively use all the anger these things produce, and not become bitter and crazy...

SIXEYES: Ok, on a lighter note... from photos I’ve carefully scrutinized it seems that all the members (excepting you of course) of your band are smokers. What’s it like being the odd man out when you’re on a six-week tour with three tobacco fiends?

JV: Yeah that's kind of a bummer. It’s strange I don't mind tobacco, what really messes me up is processed smokes. I used to work in a cigar bar and all that real tobacco was fine for me. I tried to get my band mates to roll their own. That lasted about three days.

SIXEYES: Now that you’re a world traveler and have seen things I can only dream about, or see on cable, where would you like to go if you could go anywhere right now?

Seeing how the previous question was about 'travel', I thought I'd now ask John to take a trip down memory lane for his thoughts and feelings on the past six solo albums he’s recorded and released. And, as always, JV being a generous and open soul, he offers to pay for gas so I can come along, tells me that I'm coming along on his next European tour, and says something about blueberry pancakes, or was it blueberry blunts... here he is, on the couch:

My first solo record, and my first record for a label. It’s really half an mk ultra record and half experiments in recording myself at tiny telephone. The heavy band songs (bill gates, speed lab, what did you do today, big band stars) were mk ultra songs tracked live with John Croslin. I love the title, and I love the sound of the record, but I can't listen to it. It’s too fragmented and unfocused. It wasn't until I cleared my mind of my old band that I was able to move in a new direction.

Probably my fondest memory. It was the first record i felt like I found any kind of style that was true to what I was hearing in my head. I had made a lot of breakthroughs in recording since MSOF, finding a noisier, more distressed way of tracking. This was the first record I worked with Scott Solter, who did some tracking and overdubs. John Croslin mixed it at Tiny Telephone on our (then) new Neve 5316 console.

Download a couple of tracks from Time Travel Is Lonely here.


Life and Death of an American Fourtracker (2002)

This album feels a bit rushed to me, notice it was my third record in three years. some individual songs are high points for me (the mansion, 424) but the overall feel of the record is not fully realized. Some of the sonic experiments that Solter did (the percussion in "Nikki O Nikki", the drums in "Amitriptyline") are mind blowing to me today. After this record came out I decided to slow down my recording schedule, partially in response to the increase in tours.

Download a couple of tracks from Life and Death of an American Fourtracker here.

A new direction. The first full collaboration between Scott Solter and me. It seemed to really benefit from the slowed down recording schedule. Sonically, Scott and I have never topped “Up Above The Sea”.

My only regret is leaving a track on the record that's probably the most requested song from the record. I won't name it!!

Download a couple of tracks from Cellar Door here.

The biggest seller and many people's (along with TTIL) favorite. I really feel it's too long. If I had it over again I would pull four songs of the record and put them on a companion EP. I grew up with 40 minute LPs and, for me, that's the ideal format.

The songs for the EP would've been:

Then you would've had a ten song, 40 minute record and a very interesting EP.

Download a couple of tracks from Pixel Revolt here.

9 songs, 40 minutes! Yes. The first record made with a band: David Douglas, Ian Bjornstad, David Broecker. Mostly tracked live with Scott Solter. No other players appear on Emerald City. It’ll take me a few years to figure out how I feel about this one. In general, my estimation of a new record is a manic-depressive cycle. One day you're stunned you let so many mistakes make it to tape, and other days you feel you'll never be able to make music like this again.