Emerald City, John Vanderslice's latest solo record and his first with a tried and true band backing him, was released on July 24th through Seattle's Barsuk Records, and it stands up well beside his last release, the critically acclaimed Pixel Revolt. But this time out not only is the sound pared back, but the content as well, with nine tracks which crackle, buzz, and mesmerize like the overload of media information we are inundated with each and every day (Pixel Revolt had 14). JV feels this buzz, he lives and breathes it as an avid consumer of online culture and print media, and he may understand it better than some because his new baby, Emerald City, is being promoted in a different way with print advertising being pushed to the side and JV's home away from home, the internet, being the prime focus. And the main push right now is his Tiny Telephone Emerald City Video Tour which is using nine of his favourite music blogs to host each of Emerald City's nine tracks in glorious 16 x 9 videos (go to his homepage for links to all the videos posted, so far). Sixeyes is proud to present the latest in that series, "Numbered Lithograph". Here it is, along with part 1 of the sixeyes interview with JV below... enjoy.

SIXEYES: John, the new album opens with acoustic guitar, was there any specific reason you leaned more heavily on acoustic for this album? Was it because you were tired of the electric, or is it just easier to work with an acoustic in a live recording environment?

JV: Well, to be honest I find recording electric guitar very difficult. Also, Scott Solter and I call it the "cookie monster" at Tiny Telephone because it chews up so much dynamic range. It steals space from vocals and most harmonic instruments that live in the middle. It’s like going out on the town with a loud-mouthed guy who's wearing a "sigma pi" sweatshirt. Unless you're getting jumped, he may be a liability.

There’s something more feminine and subtle about an acoustic, even when it's distorted to high heaven.

SIXEYES: Sometimes it's the little behind-the-scenes things that I wonder about, such as your going out with a photographer and scouting locations (that sounds so Hollywood) for the cover shot. What is that like? Do you typically spend a day having your picture taken? And why put your mug on the cover this time out (sixeyes: this is the first time JV has been on he cover)? And who is that woman sitting behind you on the cover of Emerald City? 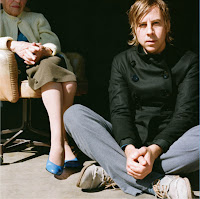 JV: Well, remember Alan that I would love nothing more than to be a cinematographer. So photo shoots for me are amazing. Autumn de Wilde and I drove around for hours scouting places to shoot. She is a tremendous photographer and the only reason I ended up on the cover, I'm not sure who else I would trust that to. We shot for about 14 hours straight, and that's pretty rough. I mean to look interesting for five minutes is tiring, right!

So, we drove by an open garage door with an old lady and her son listening to Dr. Laura (right-wing self-help blabber, if you don’t know her, it's hilarious), Autumn said: "Stop!" We got out and she charmed the women into letting us take photos with her. I drive by her house everyday but haven't seen her yet to tell her she's on the cover. I'll wait until I get them back.

I wanted to put myself on the cover because I wanted to make more of a direct connection with the listener, and because my hero is Bowie and he's almost ALWAYS on the cover!

SIXEYES: A cinematographer, eh? You know, even if I don't currently own a camera (cell phones don't count) I sometimes find myself thinking, as I gaze through windows of cars, or buses, or trains, 'that would be a great shot', or 'that's a very cool location for a shoot'. Do you ever do that? And do you also, as I do, think 'oh hell, what am I doing, I'm not gonna make a movie'? Or maybe it's just me.

JV: Yes, I think of that stuff all the time, I usually take 300-400 photos every tour. And yes I know I’ll never make a movie. That would be absurd! It’s a very potent fantasy to be able to shift into another creative area. But it took me 15 years of playing and recording to even begin to figure it out, so I’m not sure if I want to go through that again!

SIXEYES: The eighth track on Emerald City is "Numbered Lithograph", a song that was previously titled "Charles Rennie Mackintosh, Numbered Lithograph". I didn't know who Mackintosh was before being prompted to search him out online, I was certain he was an artist, a painter, knowing of your interest in art history, but he's not, he's an architect (sixeyes: he's renowned as an architect, but did paint as well). How did you receive inspiration for the lyric in this song? 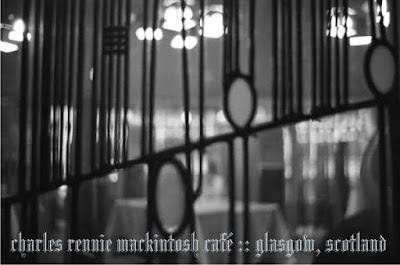 JV: Well, a girl I dated a few years ago did her arts degree at Stanford on Mackintosh, so I got interested in him through her. When I was in Glasgow I went to the Glasgow School of Art and the CRM cafe. Amazing!! I first found out about him through his wallpaper and tile designs. I am obsessed with anything domestic and crafty.

SIXEYES: What startled me and put me off on first listening to the album version of the song (I listened to a couple of live versions many times before getting a hold of the album), was that mysterious clicking-clacking-burbling-gurgle that wiggles it way throughout the song. But now I enjoy it, although I have to ask: What the hell is that?

JV: Ha!! It's a Rhythm Ace drum machine, one of the earliest drum machines ever made. I'm sure it's being jammed into a bunch of effects and distortion boxes. I'm glad you got used to it!!!

SIXEYES: And the abrupt ending, both lyrically and musically, what are you trying to say by ending the track the way you have?

JV: That song to me is about fragmentation and isolation. And things that are separated from their usual place or environment. The girl from the table, the cell phone from the girl, the bird from nature and the singer from friends and a healthier life. I wanted an anti-chorus, it actually doesn't sum up the emotions of the song, but makes the narrative feel more fractured. The quick and ruthless cut was part of that.

SIXEYES: Your old collaborator, Scott Solter, was once again in studio with you for the recording. You've worked together quite a bit and I was wondering if his role ever changes, or does he always contribute musically as well as production-wise?

JV: Well, his role gets bigger and bigger with each record. I LEAN on him! Some songs he hangs back, makes a few suggestions here and there, and let's it happen. Other songs he'll do a complete tear down. "Tablespoon of Codeine" is a Solter production. Top to bottom. Now, Douglas, Brock, and Ian wrote a lot of the music, but Scott shaped everything. My version of the song sounds NOTHING like the completed song. "Time To Go" is very similar to the demo I recorded.

SIXEYES: The upcoming Emerald City tour lists the touring band as David Douglas, Ian Bjornstad, Daniel Hart, and Dave Willingham. Who are these new guys and what's up with Dave (Mr. Comedy) Broecker missing from the line-up?

JV: Ha, Broecker is funny as hell. The movie guy voice he does is requested as often as some of the songs! He'll play with us in Seattle this month and always for the NW shows. He's getting married and trying to have a real life:) You can't blame him. We will probably play as a trio now with additional players as they're available. Daniel Hart is a genius. He plays in Physics of Meaning and Polyphonic Spree. He's an excellent violinist and singer. He'll add a lot to the set. Dave Willingham is the sound engineer for the Spree, we're lucky to have him.

SIXEYES: I get the feeling that you didn’t have any writer’s block when it came to getting these songs down on paper. If so, was that due to the fact you were bursting with ideas from your globetrotting tours over the past couple of years in support of Pixel Revolt?

JV: I had no trouble this time around. I think the best thing was taking a longer break. We have a two-year gap in between Pixel (Revolt) and Emerald (City). That’s by far the longest yet. I think the next record will be a lot faster than that. And yes the tours help, you have SO MUCH visual and emotional input that it's bound to pour out when you're still.

SIXEYES: Staying the course here, didn’t you write Pixel Revolt at your desk? I seem to recall you saying that. I want to know if any of Emerald City’s songs were penned away from that desk? Do you ever write while on the road?

JV: Yeah, I do everything on my desk. Sleep, eat. Even make love to my girlfriend. My desk is my life! I’m there right now listening to a Don Rickles interview on Fresh Air and typing this to you Alan!!! 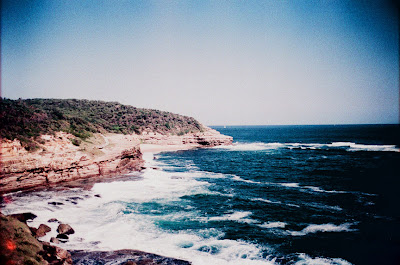 That’s a really good question because for the first time, I wrote songs on tour. The first two on Emerald, "Kookaburra" and "Time To Go" were written in Australia when I was on tour with the Mountain Goats.

We stayed on after the tour at Killcare Beach (pictured above - photo by JV) and swam and hiked. It was one of the best times of my life.

* * * * * * * * * * * * * * *
Whoa now! Hold on good reader, this is just the end of PART ONE!! PART TWO of this interview will be posted tomorrow. Please come check it out as it features what I like to call 'John Vanderslice: a self-analysis in six parts'. Which is his own thoughts and feelings looking back on all six solo albums he has released. And there's lots more, stuff like Baghdad, Bowie, Moby Dick, shadow governments, Super Bowl prostitutes, Tarot cards, and hand rolled cigarettes to mention a few.

See you tomorrow then, thanks for reading and I know that John thanks you for listening and for watching.
at 5:10 AM