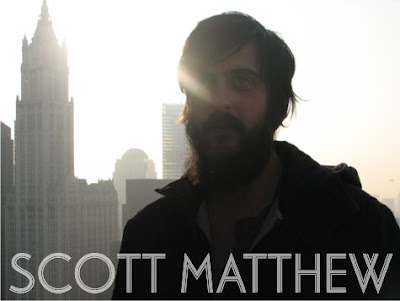 Australian native and Brooklyn-based singer/songwriter Scott Matthew is a wonderful mix of Devendra Banhart and Antony Hegarty of Antony and the Johnsons. Now that combination may sound like music which may be alienating to many people, but it isn't at all. As I stated earlier it's a 'wonderful' combination of these two artists; the otherworldly quality which Antony lives and breathes and pours out through his voice and that inexplicable charisma that new folk icon Devendra Banhart wears like an unselfconscious child. In Matthew's music these are brought together in a form much more accessible to your average music listener, but I may hear it this way as a result of my having tastes that could be termed 'slightly askew'.

Matthew gained much deserved attention for his contributions to the cutting-edge sex comedy/drama Shortbus (2006), both musically and on screen, but that film, like his music, lives in the sadly overlooked genre labeled 'indie'. It has surely gained him a new audience, but there's always room for more and so here comes his full length self-titled debut on Glitterhouse. Working with acoustic instruments (piano, guitar, violin, ukulele, bass, drums) allows the honesty of Matthew's voice to shine and float, within and above, the instrumentation, whereas electric and computerized sounds would simply weigh down his vocal gift, and therefore detract from the songs. Although that could possibly be gotten around by utilizing backup singers and or doubletracked vocals, although to me that wouldn't be the same Scott Matthew, the singer whose songs, and singing, remind me of Antony and Devendra. Two Matthew originals that appeared on the Shortbus soundtrack show up on this new record, with one, "Little Bird", being the same version, and I can't argue with his decision to include that one here, it's hard to imagine a better take. The record offers up a different take of "Upside Down" though, but sadly it doesn't include my favourite song from the soundtrack, "Language" (but if you go all out and purchase the vinyl version of the album, there are two bonus tracks, one of which is "Language"). What is most apparent, once you've grown accustomed to Matthew's voice, is his love of, and gift for, penning classic pop melodies and delivering them in his own quietly personal way. I recommend, highly, this album, this music, and this musician.

(The album is now available in several European countries, but I haven't heard about a North American release, yet) 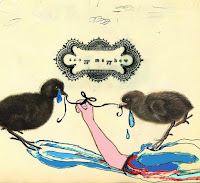