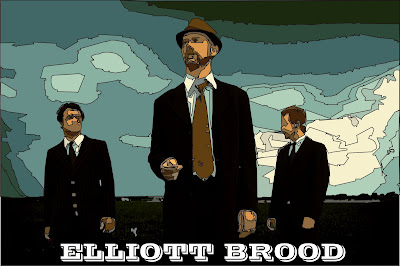 Toronto's Elliott Brood play roots music with the buzz of electricity and the thump of cold nails driven into pine. They call it 'death country', and it sure stirs up a lotta dust; from old books, from pioneer folklore, and from boots stomping and dancing floor planks into splinters. The band of Casey Laforet (guitar/vocals/bass pedals), Stephen Pitkin (suitcases/percussion/vocals), and Mark Sasso (guitar/banjo/ukulele/lead vocals) is about to tour their (and mine) native land, Canada... check the tour dates here.