The 'sunparlour' is an area of southern Ontario that is renowned for it's farming and tomato production and this is where Andrew Penner, the main force behind the Sunparlour Players is from, Leamington, Ontario, the 'Tomato Capital of Canada'. In fact, Penner grew up on a Mennonite tomato farm outside the small city of Leamington. This is where he befriended Mark Schachowskoy, the other original Sunparlour Player, when they were both five years old. Life pulled them apart as they grew older, as it often does, but they met up again in Toronto in 2005 and began to play music together once more. The years apart had matured their respective tastes and the music now, although it still bore the energy of the hard rock they admired, seemed to be springing from the soulful energy of the soil of their hometown and the migrant workers who worked the land each harvest. A year after forming the Sunparlour Players the duo self-released their debut album, Hymns for The Happy, in the summer of 2006 through their website and iTunes, a record that stomped and wailed, that crackled with resonator guitar, dual kick drums, plucky banjo, and Penner's unrestrained vocals. Throw in tent revival shouts, New Orleans horns, and heart felt lyrics and this is truly a record, and band, that deserves a second chance at life and at re-release. And that very record will finally get a proper label release this fall when award winning Toronto indie Baudelaire Records issues a remastered version that will feature a beefed up sound according to Penner:

"I'm recording some stuff. One entire track is being replaced with a stronger version, cause I feel like we didn't get it the first time round. And lots of other little things are being added. All subtle changes that I think are really neat and important. Nicer vocals, better banjo sounds, heavier drums, bigger bass. Basically, beefing up the sound of the album. Then I'm re-mixing the album at the House of Miracles (London, Ontario) again, and re-mastering the whole thing."

Penner is an interesting character. He writes music for theatre, works as a part-time shoe shiner, and is now working on some songs for the upcoming film "This Beautiful City". And 'he' was what turned my head a little over a week ago after I walked in on Penner and his new band mates, Dennis Van Dine and Michael 'Rosie' Rosenthal (original Sunparlour Player, Mark Schachowskoy, left the band about six months ago) at the El Mocambo where I had gone to see The Veils. What luck! What luck that The Veils touring partners, The Comas, had van trouble and didn't make it. What luck that I arrived early enough to hear this trio. I have to admit, at first I didn't pay much attention, but it's hard to ignore the sheer force and energy of Penner's music and the man himself. Penner puts all his soul into the songs when he's performing, and this is what tells me these guys should catch, you can hear that energy and soul on the recorded output as well. But at the time I said to the lucky person along with me to witness the performance, "I bet these are the kind of guys that grab you by the throat (and heart) live, but fall flat on record." Wrong. The recorded songs come very close to capturing the energy and fury of a Sunparlour Players live show. Here's a sample from the original self-release of Hymns For The Happy, a record that, as previously stated, will see it's label release on Toronto indie Baudelaire Records this fall: 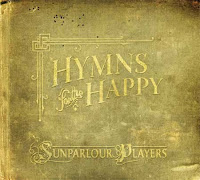 the detroit river is alive [mp3]
talk it to death [mp3]