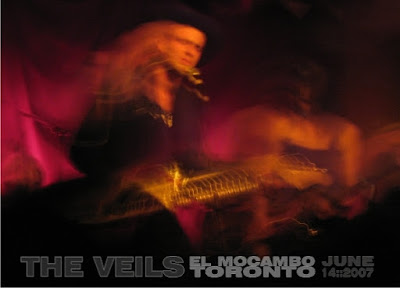 I was lucky enough to make it into Toronto on Thursday night to see Finn Andrews and his band The Veils. The only sour point of the evening was after we arrived (drove by the venue) we then spent twenty minutes looking for a parking spot. The spot we found was a 10 minute walk away and just as we were about to turn the corner at the end of the walk we see a parking lot behind the goddamn venue! As for the show (and this is the important bit), the band was great. Finn looked happy and relaxed when he wasn't looking extremely intense and passionate during the songs. In fact the whole band looked like they were having a good time (this may seem like a little thing, but it does affect the crowd and how they receive the band playing). And even though the crowd could have been bigger they roared heartily at many spots during the set and demanded the band return for an encore. I'll nitpick and say the encore should have been at least two songs, not one (they played a wild version of "More Heat Than Light"). The biggest surprise of the night was the inclusion of a new song that Finn didn't name, but it sounded great and it definitely has me looking forward to their next album. In fact, the band is going to spend some time in Oklahoma after the tour to record at the Flaming Lips compound. What this venture brings out in the writing and recording of the band is something I can't wait to hear.

Check out these previous posts on The Veils:
Veils Tickets Contest
Interview with Finn Andrews
The Veils Black Sessions MP3s
at 7:10 AM