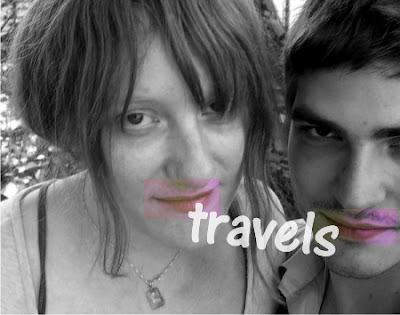 This is a re-post, the original appears here. The band has announced they will self-release their debut on October 30th.

Anar Badalov and Mona Elliot met while touring Europe together in their respective bands, Metal Hearts and Victory at Sea. Metal Hearts is a young band who released an album on Suicide Squeeze Records called Socialize in 2006, garnering the Baltimore band a couple of handfuls of postive reviews from across the US for standout tracks like "Socialize" and "Foothills". The fairer half of Travels, Mona Elliott, has been paying dues in the Boston band Victory At Sea since 1996, earning a reputation for fashioning music that creates it's own very distinctive mood. These two musicians, Badolov and Elliott, bring singular talents to a table already bearing food, like knives and forks they appear to belong together and yet serve to accomplish their own peculiar tasks. What I'm trying to say is this is good, good enough to hook your ear, and good enough to put down roots in both those ears. The songs have a prickly feel, as do the lyrics, although both are muted by the ear pleasing vocals of Mona and Anar, their voices sounding very nice against each other.

From the self-titled album:
the smell of kerosene [mp3]

This is an early, alternate version of "Isabelle", you'll have to grab the record for the new and improved "Isabelle":
isabelle [mp3]

Visit their myspace to listen to more songs.

Track List:
01 Golden Sun
02 The Smell of Kerosene
03 Sixty-Five and Sunny
04 People Sleep
05 Isabelle
06 There Is Movement
07 Love I Could Not Afford
08 Friends in Quotes
09 Hearts Racing
10 Olivia Hurt (Desolation in My Heart)

Here's where I've asked Anar a few questions to get a better understanding of the band:
When were the songs written? During the European tour, or were they all conceived since the two of you moved in together?

Anar: Most of the songs we're working on were written immediately after we got back to the US and moved in together. There's been a sudden burst of inspiration.

Are you two playing all the instruments?

Anar: Yes we are. As of now we're keeping the recordings kind of bare-bones, with just guitars/vocals/and programmed drums.

And is this a home-recording?

Anar: Yep, it's a home recording. We decided to keep it as intimate as possible and do it from our living room by ourselves. It's quicker, cheaper, and more pleasant sounding to both of us.

Is there any label interest at this point?

Anar: We literally got back from Europe, SORT of tied up loose ends, kind of left everything and started this project. I'm already contacting a particular label I'm interested in, but we haven't really had the time to focus on that as much as the music itself.

Finally, are the songs on your myspace demos, or are they what you plan on releasing? I mean, I think they sound great... but I often prefer the barebones arrangements of demos.

Anar: These songs aren't gonna be demos. We're gonna keep recording from home, finish this record alone, and then probably get the songs mastered. We also prefer the barebones arrangements.

Travels myspace page. Pay a visit and be their friends.

You can download Victory At Sea albums, tracks and songs for free with eMusic's trial subscription.
at 4:10 PM