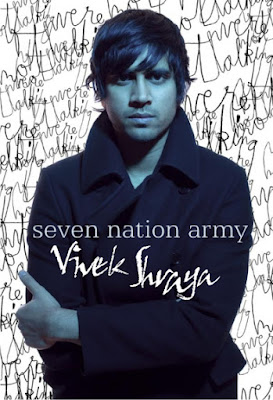 I tend to play at least one cover at live shows but I have never recorded one..."officially"...and Meghan Toohey, who produced the track (no vocals...that was all me...) and I thought it would be fun recording a cover in the same vein of the new record I just released in May (If We're Not Talking). I demo'ed a bunch of covers including Amy Winehouse, who I am really into right now, but this one really stood out for both of us...I think Meghan was the one that suggested it. Covers give you a chance to slip into someone else's shoes...you know? Maybe pretend you are someone else even. Take something that already exists, something you admire and put your own mark on it. And it's just such a great song to begin with and it's so much fun to sing.

If We're Not Talking is Vivek Shraya's first electro project and it's a good one. Listen to the cover as it throbs and crashes it's way through White Stripe territory, and enjoy (it's hard to miss) the great vocal by Shraya.