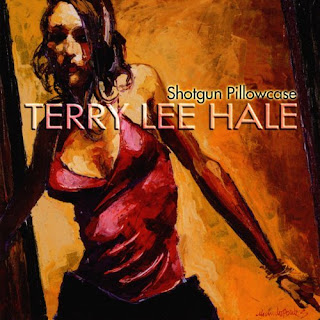 I had never come across Terry Lee Hale's music before and that's a shame because I like what I've heard, so far. Now this fella has been banging away at his guitar and the craft of songwriting for some time, with eleven albums under his Texas belt, and just plain living with something close to 54 years of sun and rain beating down on his graying head. His latest release Shotgun Pillowcase, grabbed my attention simply with it's title, but it's what's imprinted upon the disc that you should care about and spend some time with. Hale's sound brings to mind a joining of two solo musicians I'm familiar with, Alabaman Jim White and Californian Chuck Prophet. Hale's music isn't country (and neither is White's or Prophet's). Although what you hear may be a faint echo of that genre which has been condensed and filtered through a writer whose vision has found it's target and whose writing is tight, concise, and highly personal.

Hale's a very talented musician whose songs on Shotgun Pillowcase (he does a couple of covers, one being Blur's "No Distance Left To Run") seem to breathe easily with wonderful arrangements and perfect flourishes such as Hale's handling of guitars, Dobro, glockenspiel, harmonica and more... plus additional musicians filling out the sound with trumpet, musical saw, melodica, clarinet and others.

To BUY Hale's music you'll have to do some searching online, or check out his links section on his homepage.
at 10:34 AM