Nick Cave and The Bad Seeds: Live at Vorst Nationaal, Belgium May 1 2008 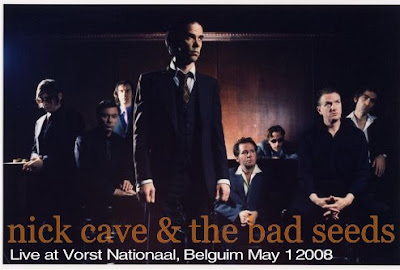 Nick Cave and band are currently touring Europe and they gave the crowd at Vorst Nationaal in Brussels, Belgium nearly two hours of entertainment last Thursday, May 1. The show was recorded by some mysterious person, or persons, and that recording has found it's way to me and what can I do, but pass it on to all of you. The sound could be a lot better, so this is more than likely of real interest to hardcore Nick Cave fans alone.

Here's part one of the show, part two will be posted in another day or two.

PART 2
we call upon the author
papa won’t leave you, Henry
more news from nowhere
the lyre of orpheus
get ready for love
stagger Lee
into my arms
hard on for love
at 11:33 PM