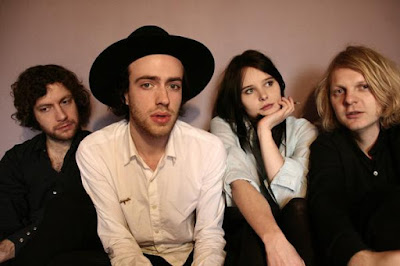 The Veils' Finn Andrews has posted a rundown of the new album, and prefacing the rundown are these three words: "Done. Done. Done."

Now the band is heading to North America for some tour dates beginning early September, get your piggy back and crack it open. You can see the tour dates below.

But first, here's a treat for all Veils fans out there (well, the ones that don't have this as of yet), The Veils 2 Meter Sessies done in 2004:

the valleys of new orleans
lavinia
h.o.l.l.a.n.d.
the tide that left and never came back

And finally, here's what Finn has to say about all the songs the band has recorded for their upcoming 3rd album:

THE LETTER
We've talked about this one before. It dances, it sings, it'll bring the house down I think.

THREE SISTERS
It's loud, it's scary, it's also covered in mandolins, mad baritone howls and a blistering B3.

SUN GANGS
Ghostly little number this - written as a kind of unwitting follow-up to "Under the Folding Branches".

KILLED BY THE BOOM
A narrative concerning the death of a nameless vagabond with "The Dull Eyes Of A Steer And A Lion's Mane" set beneath a wall of guitars that sound like broken lightbulbs and a hammond being smashed to bits.

SIT DOWN BY THE FIRE
When it all goes wrong sometimes you have no choice but to just watch it all burn to the ground. That's the general idea anyway. Big and quite, quite beautiful.

LITTLE ELEGY
Not sure if this will make it onto the album or not, it's only a minute long and kinda ties the room together nicely.

THE HOUSE SHE LIVED IN
Anyone that came to see us play last year may recognise this little number. The story of...well, you should decide that for yourselves. She ain't coming home though I don't think.

IT HITS DEEP
As mentioned before, the word 'Libidinous' immediately leaps to mind when attempting to describe this. Music to make love and possibly even build a small fort to.

DESTINED FOR GREAT THINGS
Quite a departure for us this one, it reminds me a little of My Bloody Valentine crossed with Noel Coward. Make of that what you will. SCARECROW Slow and very, very bare, probably the most naked my voice has ever sounded. It's sad, boy is it sad.

LARKSPUR
Those who came to our residency at The Enterprise earlier in the year will have had a sneak preview of this one. Originally an hour long we managed to whittle it down to just under 9 minutes. It's about writing, about giving yourself over to it completely and just going fucking barmy. Monolithic, a little scary and, we hope, very good fun indeed.

BEGIN AGAIN
What would a Veils record be without the obligatory reflective closer? Sounds like an anchorman realising he left the gas on. And there it is. We're off to America now, come say hi if you can.

* * * *
A couple of youtube vids of new songs from their live stand at the Enterprise Tavern in London this past June: