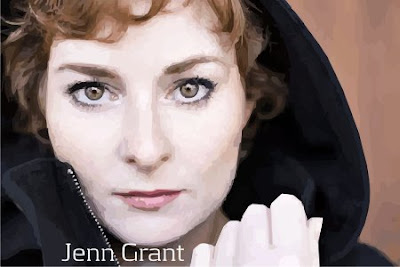 There are an endless number of talented singers and songwriters toiling under the mainstream radar. We call it (okay, I call it) indie land, and it's a great place to travel, you never know who, or what, is right around the corner. Sometimes you even rediscover a place you'd found before (quite often the places in indie land move around on their own, it is a magic place) and feel the same wonder or maybe even awe, but definitely surprise. Well, Jenn Grant is one those those places, I first found her back in 2006, not long before the release of her second album Orchestra For The Moon (I wrote about it here).

Echoes, her new album, out since February, offers 13 tracks like it's predecessor, but unlike that record this latest lacks that knockout standout track that "Dreamer" was to Orchestra For The Moon. What it does have is the outstanding voice of Jenn Grant and that's a great bonus... I've got to say that I am extremely picky. I'm fifty years old and don't listen to the music I listened to when I was twenty, hell I don't listen to what I listened to five years ago. What I'm saying is this: You should give Jenn Grant a chance, give her a listen, her myspace is here. Her website has a player that streams some of the new record (five Echoes' tracks and the aforementioned "Dreamer"). I know many of you who take this advice will like what you find. I recommend you explore her music and I highly recommend you get a copy of her album Orchestra For The Moon. Oh, one last thing, she's Canadian... enough said.

Check her tour dates here. If she's not coming to your neck of indie land, try contacting the friendly people at Six Shooter Records, they might be able to bring indie land to you.
at 6:53 PM