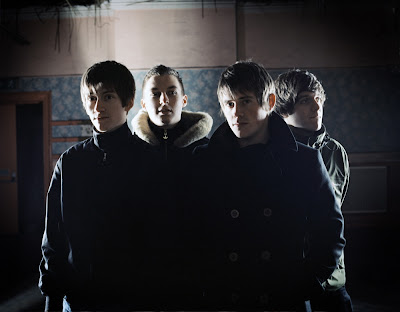 The latest release by The Arctic Monkeys, Humbug, takes the young band in a different direction than what you might expect. Working with Queens of the Stone Age leader, Josh Homme, in the producer role, the Brits take a confident step away from their past and come up with something that works for the most part. I can't get enough of a song called "Cornerstone", the only track not attributed to Homme, but to their old producer, James Ford. Any of you familiar with Arctic Monkey singer/songwriter Alex Turner's sideproject, The Last Shadow Puppets, and it's step back into the sound of the '60s, won't be too shocked that his main band have shifted gears a bit... but not so much into the '60s as towards the dry desert throb of Josh Homme's QOTSA.

"Cornerstone" is a lovely song (and my favourite), with the emphasis on melody bolstered by Turner's restrained melancholic vocal. These boys are growing up and looking back, but don't we all?