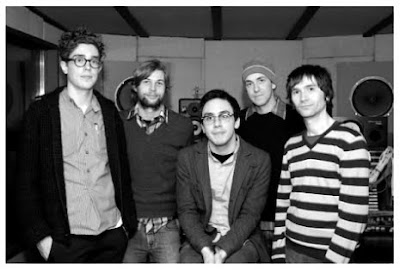 Born Ruffians recently announced that their new album will see light of day in 2010 and will be called Say It. Now, they haven't set a date in stone, although the word "spring" was mentioned, so it could be a cold winter for Born Ruffians fans looking for something fresh. Then again, maybe not... it just so happens that Born Ruffian, Luke Lalonde, has been steppin' out with Tokyo Police Club's Graham Wright, Will Currie of Will Currie & The Country French, Ex-Po's Dean Marino, and Jason Sadlowski of Jay Sad. Well, not for long, it was sort of a one night stand... they all gathered at Toronto's Chemical Sound Studios with the intention of recording an EP in one session. This goal was accomplished according to the band's website and I have 100% proof, okay, 20% proof (it's supposedly a five song EP and I've got one song for you to download). And they settled on the band name, Novels (pictured above).

They don't intend to sell the 5 song EP in any form, as stated on their website:

"NOVELS won't be sold in CD stores, on the internet, or anywhere else. Instead, we'll give them away, or put them places. Maybe you'll find a copy sitting on a park bench. Maybe a masked man will hand you one as he passes you on the street. Maybe none of these things will happen. But we'll make sure that everyone gets a chance to listen if they want to."

"This Would Be The First Time" is short, catchy as hell, and all yours... so, spread the word and the song. What? You can't get enough of Novels? You're in luck, the session was photographed and videoed ( is that a word?). Go here for vids (I know, that isn't a word).