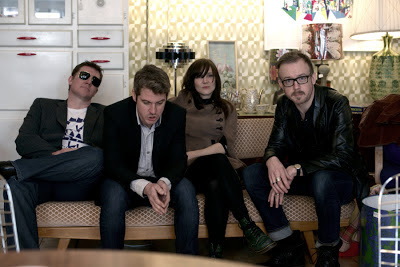 I think it was in 2006 when, luckily, I tripped over the tangled roots of Sweet Billy Pilgrim's music. The band was just getting their feet under themselves with one album and two EPs under their optimistic belts. Contact was made, can't recall if band leader, Tim Elsenburg, dropped me a note, or I did the dropping, either way, things smelled rosy (just ask william s.). Unfortunately the band and their music dropped off my radar, but now the blip, blip, blip is strong and distinct and I'm honing in on my long lost target. In the very near future an exclusive interview with Elsenburg of the critically acclaimed band, nominees for the Mercury Prize in 2009, will bloom on this very page.

Their most recent record, 2012's Crown and Treaty, has received staggering reviews in Europe and North America. And without doubt the most gilded love letter to the album came via the UK music mag, MOJO. Declaring it an 'Instant Classic'. And just recently SBP and MOJO have united in bringing everyone this music for free. Visit Mojo to download Crown and Treaty.

Visit the band site for tickets to a rare London performance.