The Decemberists: "The Engine Driver" 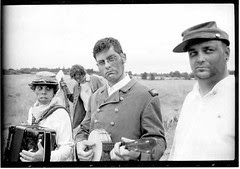 Much has been, will be, and is being made about leader of The Decemberists' Colin Meloy's literary inspirations, references, and training. Not surprising since this is one way to avoid confronting his fey, and at times oddly affected, singing delivery; a delivery which, ironically, goes mostly undelivered in the new song, "The Engine Driver". Meloy tones down the pronounced caresses of certain words in this track, but hauls them out in many of the other songs on the band's new disc, Picaresque.

How can so much pour forth about this band (Meloy's lyrical prowess, band members musicianship, their intelligence), and yet almost none of it splashes on Meloy's singing? Consider yourself blessed, or curiously cursed, that Meloy's cloying vocal affectation is missing here--either way you may find yourself better off with Destroyer and Dan Bejar's nearly timid, offbeat vocal, lacerating his eccentric indie pop gems.

And finally... what's with these guys dressing up in everything from grade school theatre production costumes, Civil War uniforms, and '30's Hollywood wardrobe in promo shots?