I want to thank Young God Records for putting my review of Akron/Family's s/t debut up on their newly refurbished site. I wrote it a while back (January) and wondered it it would get on their site, so thanks Young God. 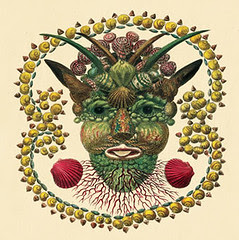 Well, it appears Young God Records founder, Michael Gira, has done it again -- bringing Devendra Banhart to the fore--giving him a platform wasn't enough? (Can you blame him?) Now he presents us with the gift of the Akron/Family. A quartet from the east and west of the US of A, they were drawn to the bright sounds of New York City a couple of years ago and quickly cloistered themselves in a Brooklyn apartment. This is where they created albums worth of material over that time, working in a hothouse enviroment unfettered by the outside world. The songs selected for their self-titled debut are uncomfortably personal, at times the term eavesdropping doesn't seem too far fetched--and from the array of weird and other worldly sounds that complement the mostly acoustic songs (they do make use of electricity), it seems likely they learned to 'play' their apartment, what is termed 'bric-a-brac' in the liner notes.

The music presented here is cornered in an American/Experimental mode, but with it's back to the wall so it may reach out with calloused fingertips into many other genres, giving us glimpses of The Beatles, back porch country choral and Beach Boys harmonies, the current folk-revival, even snatches of an Appalachian Radiohead. The band they most remind me of though is Minus Story; who always sound to me like they create music for each other and each other alone--while nailed into a dark basement with great acoustics.

This is the impression the four young men, all in their mid twenties, of Akron/Family give me. And it's a great one--an impression of talent and creativity fuelled by a desire to create art.