Can You Help Bob Wiseman? 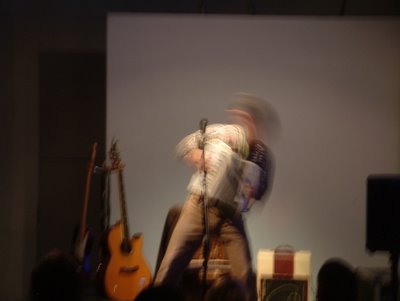 Bob Wiseman is a very talented Canadian indie musician who would like to make some headway south of the border. I have seen him perform and can attest to his improvisational talents, musically, as well as performance wise. A while back I did a post on him which included a few links to mp3s [I have included a number of further mp3 links at the bottom of this post]. Bob Wiseman contacted me in the hope that *sixeyes readers in the biz could help out. Here is the 'open letter to American labels' he sent...

Bob Wiseman here. Do you have any smallish acts, solo, duo(?) who might be into the following trade with me? I would take them through the following Canadian dates in March/06.

I get audiences of 25 - 100 people depending on the city. Usually get sponsorship from the college radio station and sometimes the local folk/music festival too.i will provide a place for us to crash (clean and tidy) and dinner. a conversation about money and gas must take place in advance but I am a fair minded sub rock star.

In exchange I would like to tour the west coast of the states, trying to showcase for some american labels for me. but all iIneed is a tour-mate who, like me in Canada, can set up the shows in America and take care of where we sleep and eat etc. From Seattle to San Diego.

------
If anyone out there can help him out, don't be shy about getting in touch through his email contact above.
------
BOB WISEMAN MP3s - all hosted on yousendit.com - these links will be good for about seven days.

+ for joseph k
+ what once was wild
+ queen of sheba
+ city of wood
+ how round the earth
-------
Here's an interesting interview with Bob Wiseman done with Toronto alternative weekly, Eye.
Here's a bio found on Trouser Press, although it is a tad outdated.
at 8:11 PM