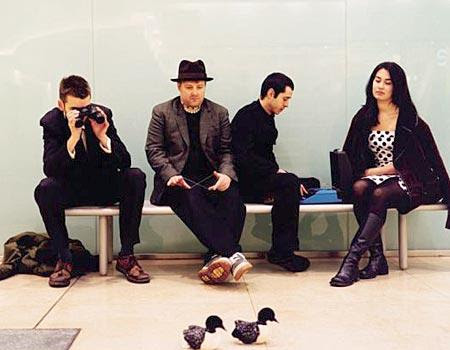 The four members of Guillemots [pronounced "gullymots"] make London, England, their home base, but are an international crew from England, Scotland, Canada, and Brazil. Fyfe Dangerfield (keyboards/vocals), MC Lord Magrao (guitar), Aristazabal Hawkes (upright bass) and Rican Caol (drums) make up the ambitious group who make sounds that you might hear if Scottish band Belle and Sebastian traded in their twee-ness for a tad more thump, a touch more grit. The band's choice of instrumentation and arrangement offer promise for future efforts as it shows the brains behind Guillemots are leaders and not followers. On tracks like "Who Left The Lights Off Baby" the band has a loose limbed jazzy feel; an improvisatory feel lying under Fyfe Dangerfield's pleasing vocal.

A new Guillemots single has just been released on Fantastic Plastic Records which offers the title track, "Trains To Brazil", as well as "My Chosen One" and "Go Away".This follows a well received 4 track debut EP called I Saw Such Things In My Sleep. Which included this track...