Forro In The Dark: "I Wish" MP3: feauring David Byrne 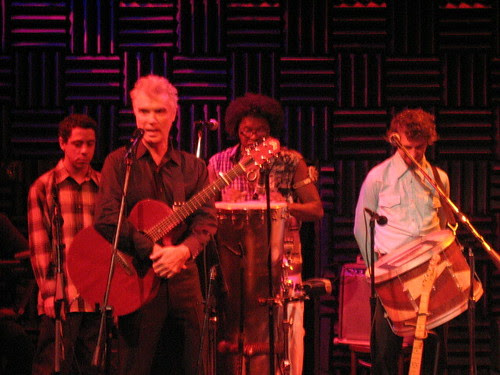 "Asa Branca" (White Wing) is the song which Brazilian Forró (pronounced: foe ho) bands are measured by. Forró is not only a type of music, it is also a dance which grew out of the rhythms of the music. Bonfires of São João is the new album by NYC based Forró band, Forró In The Dark, led by percussionist, Mauro Refosco. Several publications are predicting that this band will ignite a renewed interest in Brazilian music--and they have a few heavy hitters singing on the record: David Byrne, who contributes his talent to two tracks, Cibo Matto’s Miho Hatori, and Bebel Gilberto, who sings a version of an old Peggy Lee song, "Wandering Swallow”.

David Byrne had this to say about working with the band on their latest album:
"I sang "Asa Branca" and "I Wish" - the latter song emerged out of a jam. I was warming up with some chord changes and Mauro suggested during the recording session that we all improvise around those chords. The result was surprisingly good - but, maybe because I can, I suggested that with just a few words added, with a vocal, the song might be more focused. The lyrics and vocal turned it into a vaguely Country outpouring of pain, anger and loss - which maybe made explicit the link between forró and North American country music."