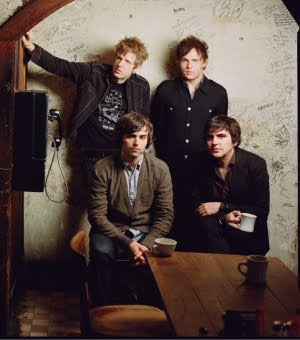 One of the best, yes, one of the best, bands out there, Spoon, have a new album on the way and tour dates to go along with it. Transference will be brought to you by Anti (Europe) and Merge (US) in the very early new year, January 26th to be exact. With eleven tracks in total, you've now got eleven reasons to keep on breathing into the New Year (but, I hope you've got better reasons than that... I know I do). No word yet, but I'd guess that early spring will see a comprehensive tour itinerary for the band, likely to cover the North American continent (I hope).

Here's a sneak preview of the third track off of Transference, "The Mystery Zone". Not sure if this is the album version, I stumbled across it last week. Also, here are live versions of "Written In Reverse" and "Who Makes Your Money", the fourth and fifth tracks (if you're keeping track of the tracks) from a show at the Fillmore West, September 22, 2008.

the mystery zone [mp3] Link removed at request of label

Transference Track List
01 Before Destruction
02 Is Love Forever?
03 The Mystery Zone
04 Who Makes Your Money
05 Written in Reverse
06 I Saw the Light
07 Trouble Comes Running
08 Goodnight Laura
09 Out Go the Lights
10 Got Nuffin
11 Nobody Gets Me But You